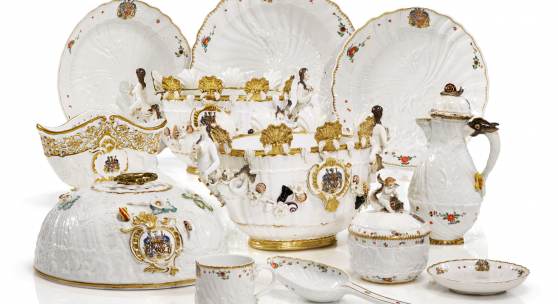 NEW YORK, 7 January 2019 – Sotheby’s is pleased to unveil highlights from A Collecting Legacy: Property from the Collection of Nelson & Happy Rockefeller on 18 January, as part of our 2019 Americana Week auctions in New York. This special offering follows the success of our November and December 2018 auctions of works from the couple’s collection. Jewels from Happy’s personal collection were sold in our 4 December auction of Magnificent Jewels, while a dedicated sale on 13 November offered important 20th century design, impressionist & modern and contemporary art. Titled A Modernist Vision, this exceptional group was in part the result of Nelson Rockefeller’s commission of an original interior from designer Jean-Michel Frank, who filled Nelson’s distinguished 810 5th Avenue apartment with his unique designs, as well as those of celebrated artist-designers Alberto Giacometti and Christian Bérard. Separate releases available

Led by 16 pieces from the celebrated Meissen ‘Swan’ service and important Chinese export ceramics, the January sale will offer a remarkable array of the couple’s furniture and decorative objects, including silver, Americana, books & manuscripts, Chinese and Japanese works of art and prints, and modern and contemporary art, showcasing in its entirety Nelson and Happy Rockefeller’s worldly vision and eclectic spirit, while providing an intimate glimpse into how the couple lived with these timeless objects.

Works from the sale will be on view in Sotheby’s York Avenue galleries beginning 11 January, alongside our 2019 Americana Week auctions.

Passionately assembled with wide-ranging interests and an unwavering eye for quality, the collection of Nelson and Happy Rockefeller is not only tied to one of America’s most storied families, but is also a significant and pioneering collection in and of itself, expressing, as Nelson himself once stated, “the spirit of the time” in which they lived.

AUCTION HIGHLIGHTS
The January sale is anchored by a remarkable suite of 16 pieces from the renowned Meissen ‘Swan’ service, led by a Pair of Meissen Monteiths circa 1740-41 (estimate $150/250,000).

The Meissen ‘Swan’ service has gained its highly covetable status amongst collectors, academicians and enthusiasts with its timeless beauty, masterful modeling and distinguished provenance. Equally importantly, the service originally comprising over 2,200 pieces also attests to the prestigious use of porcelain on aristocratic tables by the second quarter of the 18th century, replacing silver services.

The service, with its numerous dinner and dessert service shapes, was commissioned in 1736 by German statesman Count Heinrich von Brühl (1700-63), who later became the Director of the Royal Porcelain Factory at Meissen. Bearing the coat of arms of von Brühl and his wife, Maria Anna Franziska Kolowrath-Krakowski, the lavish set was completed in 1742 and was presumably the ultimate status symbol for von Brühl, who was known for his extravagant official festivities while also promoting the abilities of the factory under his direction. While the service remained in the family’s possession until the late 19th century, from 1880 pieces were lent to museums in Dresden and Berlin or passed to collectors, so that by 1900 only 1,400 pieces remained. These works were dispersed or possibly destroyed at the end of the Second World War, presenting collectors today with a rare opportunity to acquire numerous pieces from the renowned service, including a Wärmeglocke (estimate $50/70,000), Wine-Bottle Holder (estimate $30/50,000) and a trio of Large Circular Dishes (estimates from $25/50,000).

Two Extremely Rare and Important Chinese Export Armorial Goose-Form Tureens and Covers for the Spanish Market, Qing Dynasty, Qianlong Period, circa 1775 lead the wide range of Chinese export ceramics on offer. The Negrete goose tureen is distinguished by the initials JCN, for Juan del Castillo Negrete, which are unusually marked on the base of pieces from this particular service (estimate $150/250,000). The arms that adorn the Gálvez tureen are those of José de Gálvez y Gallardo, the first Marquis of Sonora (estimate $120/180,000). The inscription on the work reads ARMAS DELEX MOSE NORGALVEZ, but it instead should read ARMAS DEL EXMO SENOR GALVEZ, or “The Arms of his Excellency Senor Gálvez” – an error by the Chinese artist in copying the handwritten instructions that accompanied the commission.