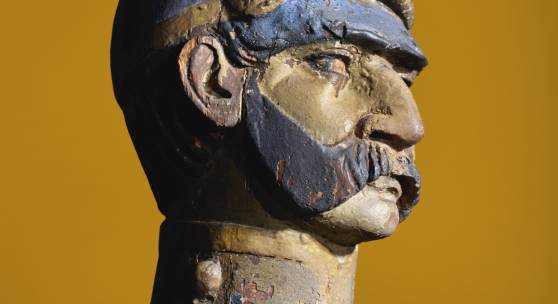 A Long-Billed Curlew and Pair of Canada Geese Lead an Impressive Flock of Bird Decoys Estimates $300/500,000 Each

NEW YORK, 10 January 2019 – Sotheby’s is honored to unveil highlights from The History of Now: The Important American Folk Art Collection of David Teiger – a dedicated sale that will highlight our January 2019 Americana Week auctions in New York.

One of the greatest collections of American folk art remaining in private hands, the special offering this January follows the success of our 2018 sales of contemporary art from Teiger’s collection. Sotheby’s sales of works from the Teiger collection have totaled more than $100 million to date, with proceeds benefitting Teiger Foundation for the support of contemporary art.

The outstanding offering this January represents the zeniths of American folk art material. Led by striking wooden figure of Captain Jinks from circa 1880, the sale also includes many superlative examples of American weathervanes, remarkable ship figureheads, trade figures and exquisite bird decoys. Building on the foundation of his contemporary collection, Teiger ventured into the arena of American folk art in the 1990s and quickly amassed one of the finest, museum-quality collections of the material in the world.

Works from the sale will be on view in Sotheby’s York Avenue galleries beginning 11 January, alongside our 2019 Americana Week sales, ahead of their auction on 20 January.

THE VISION OF DAVID TEIGER
For Teiger, collecting was a joy – from the moment he purchased his first picture in 1956 to his years as honorary trustee at the Museum of Modern Art in New York and benefactor of museum shows across the globe.

This enjoyment was tied to an innate fascination with, and relentless pursuit of, perfection. Throughout his life, he carried with him a list of principles from which he would not be tempted to veer. The criteria for making a purchase included; ‘best of type’, ‘mastery of material’ and ‘in 20 years, will I still love it?’.

Teiger’s embrace and pursuit of American folk art - almost exclusively American folk sculpture - was consistent and of a piece with the pathway, methodology and passion that characterized his embrace and pursuit of Contemporary art. His collecting began in earnest in the early 1990s, with a burgeoning interest in the historic material developing into one of the greatest private collections in the category over the course of five years, and an ever-increasing appetite for Contemporary art consuming him for the next twenty.

AUCTION HIGHLIGHTS
A towering figure of Captain Jinks, likely created by Thomas J. White circa 1880, leads the exemplary selection of folk art sculpture on offer (estimate $400/600,000). “Captain Jinks of the Horse Marines” was a satirical music hall song that became immensely popular after it was published in Brooklyn in 1868. The highly skilled figure carver Thomas J. White worked for a time in the shop of the renowned sculptor Samuel Anderson Robb and is said to have used the master as his model for several carvings of Captain Jinks. Other examples of White’s Captain Jinks figure reside in the collections of the Newark Museum, New Jersey, the Shelburne Museum, Vermont, and the National Museum of American History, Smithsonian, Washington, D.C., while a fourth was depicted for the Index of American Design.

A Standing Tiger by Augustus “Gus” Wilson, regarded as the best example of its kind, also highlights the sale (estimate $250/500,000). Arguably Wilson’s masterpiece, the present work is the largest of three standing tigers that the Maine woodcarver was inspired to create after seeing newspaper photos of Emyr, a massive tiger brought to Portland by the Ringling Brothers Circus in 1931. The commanding beast, carved from salvaged railroad ties and telephone poles kept in the artist's barn, is the last of the three examples remaining in private hands. The other two were exhibited at the American Folk Art Museum, the Brooklyn Museum, and the Metropolitan Museum of Art in the 1980s and are now in the permanent collection of the Brooklyn Museum.