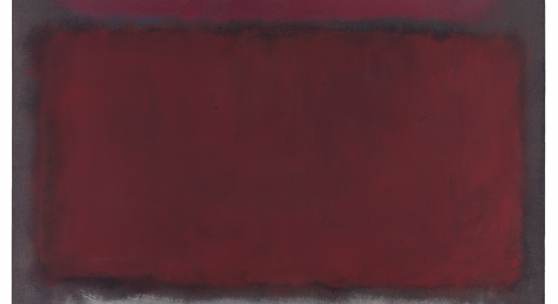 Sotheby’s to Offer Mark Rothko’s Untitled, 1960 On Behalf of SFMOMA, Sold to Benefit the Museum’s Acquisitions Fund
Painted at the Height of Rothko’s Career, Untitled, 1960 Is Estimated to Sell for $35/50 Million
Highlighting Sotheby’s CONTEMPORARY ART EVENING AUCTION This May in New York

NEW YORK, 15 February 2019 – Sotheby’s is honored to announce that we will offer Mark Rothko’s Untitled, 1960 on behalf of the San Francisco Museum of Modern Art (SFMOMA) this May in New York, sold to benefit the institution’s Acquisitions Fund.

An important work completed at the apex of Rothko’s artistic powers, Untitled, 1960 is one of just 19 paintings completed by the artist in 1960 (pictured right). This year marks a critical juncture in the iconic Abstract Expressionist’s career, following his defining commission of the Seagram Murals (1958-59) and his representation of the United States in the XXIX Venice Biennale (1958) – organized by the Museum of Modern Art, New York, which would subsequently hold Rothko’s first and only major lifetime retrospective in 1961. Untitled, 1960 is distinguished further by its connection to Peggy Guggenheim, preeminent philanthropist and patron of the 20th century.

Untitled, 1960 will travel to London, Taipei and Hong Kong, before returning to New York for exhibition and auction this May. The painting is estimated to sell for $35/50 million in Sotheby’s Contemporary Art Evening Auction.

Following a collection review, and working within the guidelines of the Association of Art Museum Directors (AAMD), proceeds from the sale of Untitled, 1960 will only be used to purchase works for the museum.

Neal Benezra, Helen and Charles Schwab Director of SFMOMA, said: “With a spirit of experimentation, diversity of thought, and openness to new ways of telling stories, we are rethinking our exhibitions, collections, and education programs to enhance accessibility and expand our commitment to a global perspective, while sustaining our dedication to Bay Area and California art. Untitled, 1960 is being sold in order to broadly diversify SFMOMA’s collection, enhance its contemporary holdings, and address art historical gaps in order to continue to push boundaries and embrace fresh ideas.”

Gary Garrels, Elise S. Haas Senior Curator of Painting and Sculpture, said: “SFMOMA is very fortunate to have rich holdings of Mark Rothko, including his undisputed masterpiece No. 14, 1960, which was acquired in the late 1990s as the result of another strategic deaccession. The proceeds from the upcoming sale will allow us to make great strides in diversifying the collection. Janet Bishop, Thomas Weisel Family Curator of Painting and Sculpture, and I are creating a focused plan and list of priority acquisitions. Works will be proposed to our Accessions Committee for review as early as May 29, 2019.”

Saara Pritchard, Senior Vice President and Senior Specialist in Sotheby’s Contemporary Art Department in New York, said: “Sotheby’s is honored to present Mark Rothko’s Untitled, 1960 on behalf of SFMOMA this spring. This exquisite work embodies the height of Rothko’s artistic practice, and provokes an intense emotional reaction in the viewer which was his preoccupation at this time. While featuring all of the expressive and transcendent qualities of Rothko’s 1950s pictures, there is a nuance to the surface, brushwork and layering of colors in the present painting that creates a compelling sense of vibration, movement, breath, life and depth. Given the rarity of works from this period on the market, as well as its connection to the great Peggy Guggenheim, the appearance of Untitled, 1960 at auction this spring will be a major market moment – one we are privileged to present to collectors around the world in the coming months.”

The ownership history of Untitled, 1960 unites the artist and institution with one of the preeminent philanthropists and patrons of the 20th century. A champion of Abstract Expressionism broadly and of Rothko specifically, Peggy Guggenheim’s pioneering vision and commitment to the artists she promoted paved the way for one of the most significant artistic movements in history. Determined to provide a voice and platform to this new generation of artists, Guggenheim gave Rothko one of his first important solo shows in 1945, at her famed Art of This Century gallery. The following year, she loaned the artist’s Slow Swirl at the Edge of the Sea to SFMOMA’s exhibition of Rothko’s work titled An Environment for Faith, and subsequently donated the work to the institution. Slow Swirl at the Edge of the Sea remained in the museum’s collection until 1962, when SFMOMA made the direct request to Rothko to exchange the work for a more contemporary example of his oeuvre. The artist obliged, and the museum selected Untitled, 1960, which has remained in their collection to present. Slow Swirl at the Edge of the Sea now resides in the collection of The Museum of Modern Art, New York.