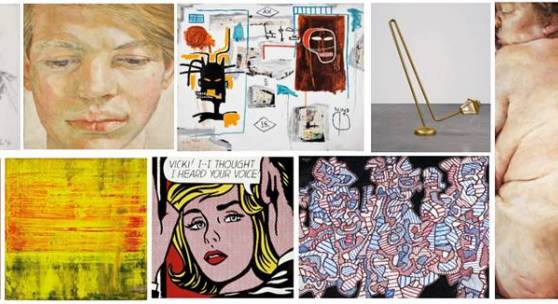 Lucian Freud’s Mesmeric Portrait of Lifelong Friend and Guinness Family Heir
Offered at auction for the first time, having hung next to the fireplace at the magical Luggala estate for over half a century

February 2019, London: This Spring, Sotheby’s Contemporary Art Evening Auction will open for the first time with seven consecutive works by female artists which speak to the theme of corporeality, female embodiment, and the treatment of the female form in traditional art historical dialogues. Speaking about the auction, Emma Baker, Head of Sotheby’s Contemporary Art Evening Sale, said:

‘This year’s sale opens with number of powerful works by female artists which, together, offer a new and compelling narrative about the perception of women in art – as both subject and author. From a wonderfully subversive totem by Rebecca Warren, whose ironically voluptuous female-centric sculptures I’ve admired for a very long time, to Jenny Saville - whose unshakeable feminist perspective has been absolutely pivotal to the evolution of the art world - it was the natural choice for me to place these artists at the forefront of the sale, crowned by the appearance of Juncture just months after Saville achieved the highest price for a living female artist at Sotheby’s.’

A colossal nude titled Juncture (Lot 5, 1994) by British artist Jenny Saville will star in the forthcoming sale. The giantess painting will be offered with an estimate between £5,000,000-7,000,000, the highest pre-sale estimate ever placed on a work by a living female artist. A paradigm of the fleshy female body in paint and Saville’s principal subject, the work was born from the artist’s study of twentieth-century feminist theory and the male-dominated canon of traditional nude portraiture. Towering three metres tall, the painting celebrates the female body in a way that squares up to the depictions of women in the traditional art historical canon, and to modern society’s obsession with ageless perfection and petite symmetrical proportion (watch the video here).

This momentous painting closely follows a prodigious early charcoal drawing by Saville (lot 1, Untitled, 1990, est. £100,000-150,000), which will open the sale. Never before published or exhibited, the work has remained in the same private family collection since it was gifted by the artist. Untitled speaks to a very specific moment in the early prodigious years of the artist’s career, as she approached the Glasgow School of Art show which would propel her into the limelight and bring her to the attention of Charles Saatchi. The developmental work prefigures the low vantage point and downward gaze exhibited in her later monumental canvases Branded and Propped (both 1992), the latter of which set a new auction record for a work by a living female artist.

The sale will comprise a total of 68 lots, ranging from a private collection of parodic works by rebellious German duo Albert Oehlen and Martin Kippenberger, to explosive works on paper by Jean-Michel Basquiat, an iconic Pop canvas by Roy Lichtenstein, and the inexorable gaze of Lucian Freud. 70% of lots will appear on the market for the first time, with 35% heralding from five esteemed private collections including that of Marc Jacobs, David Teiger and Louis J.C. Tan.

The Day sale will follow, and will be punctuated by the first self-contained, generative work of Artificial Intelligence ever to appear on the market. Created by German artist Mario Klingemann, Memories of Passersby I uses artificial intelligence to create a never-ending stream of new portraits inspired by the Old Masters. Heralding the latest development in the rapidly emerging field of AI Art it will be offered with an estimate of £30,000-40,000 (watch the video here).