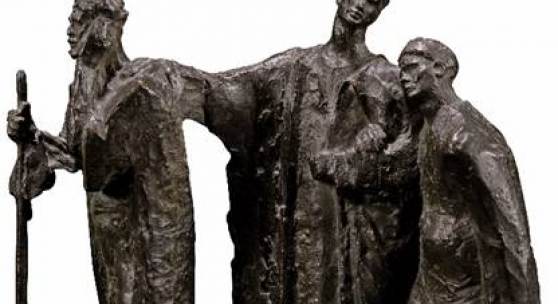 Ashkan Baghestani, Sotheby’s Contemporary Arab and Iranian Art Specialist and Head of Sale, said: “It’s very exciting to have the opportunity to handle such a rare sculpture by one of the most pioneering sculptors of the Middle East. Often in Mokhtar’s works, the viewer is invited to seek out his deeply symbolic representations of larger ideas, and the fact that this powerful piece was given to the artist’s teacher frames it perhaps as an allegory of the transmission of knowledge – and the importance of leaning on each other for guidance and support.”

A rare and important sculpture by Egypt’s most significant modern sculptor, Mahmoud Mokhtar’s Three Beggars embodies the artist’s use of his classical training to mould local figures from Egyptian culture and Islamic history. One of only two examples of this work are known, with the other held in the collection of the Mokhtar Museum in Cairo. Having remained in the same private collection since it was gifted to Mokhtar’s teacher, the sculptor Jules-Félix Coutan, in the 1930s, the bronze is set to make its auction debut on 30 April, as part of Sotheby’s 20th Century Art / Middle East sale.