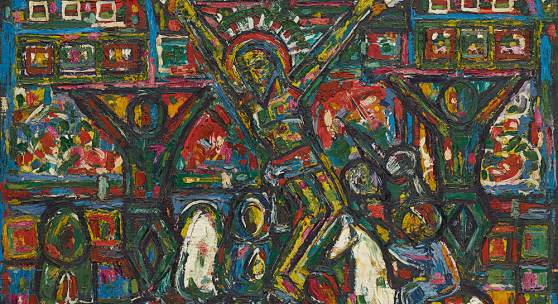 NEW YORK, 6 March 2019 – Sotheby’s is pleased to unveil the contents of its upcoming Asia Week sale series in New York. Coinciding with the 10th anniversary of Asia Week New York, the sales feature an exceptional group of over 1,150 lots spanning centuries of artistic production. All eight auctions in the series open for public exhibition in Sotheby’s New York galleries beginning 14 March, with auctions taking place from 18 – 23 March.

Christina Prescott Walker, Senior Vice President & Division Director of Asian Art, commented: “We are pleased to offer a wide range of high-quality Asian Art once again this season, at price points from $500 to over $1,000,000 and ranging from Contemporary to Ancient in date. A large number of the works offered have exceptional provenance, and many appear on the market for the first time in a generation.”

MODERN & CONTEMPORARY SOUTH ASIAN ART
Auction 18 March @ 11:00AM
The Asia Week series opens with our auction of Modern & Contemporary South Asian Art. Highlighted by a spectacular array of art by some of the most important and avant-garde artists from India, the sale is highlighted by F.N. Souza’s Golgotha in Goa – a rare work painted in Bombay in 1948 and included in the artist’s fourth solo show at the Bombay Art Society that year, which demonstrates the profound influence of Catholicism on Souza’s personal and artistic development (pictured left, estimate $250/350,000). While Souza was an incredibly prolific artist across his nearly-seven-decade career, works from this formative period remain incredibly rare – less than 20 paintings by Souza from the 1940s have ever appeared at auction, marking this as a major event in the artist's market. The work remained in the artist’s personal collection until just a few years prior to his passing, and was acquired by a fellow Goan private collector who cherished it as long as he lived.

Further auction highlights include several early Maqbool Fida Husain paintings from his Japan and Banaras series, as well as iconic works by Jagdish Swaminathan, Sayed Haider Raza and Ram Kumar. The auction also features a diverse selection from the Bengal School of Art, as well as Pakistani contemporary art.

JUNKUNC: ARTS OF ANCIENT CHINA
Auction 19 March @ 10:00 AM
The week continues with an exceptional selection of Chinese gilt-bronzes, weapons, jade animals, Buddhist sculpture and pottery collected by Stephen Junkunc III. The works span China’s antiquity, dating from the Neolithic to the Ming Dynasty periods, offering a fascinating insight in the rituals, religions and politics of the times.

At its height in the mid-20th century, the Junkunc Collection numbered over 2,000 examples of exceptional Chinese porcelain – once including two examples of the fabled Ru ware – jade, bronzes, paintings and Buddhist sculptures. The collection serves as a testament to a period of unprecedented abundance of important Chinese material available in the West, as well as Junkunc's limitless intellectual curiosity, coupled with the means and savvy to acquire internationally from the leading dealers in the field.

Many rare works highlight the 19 March auction, including an Exceptional Gilt-Bronze Dragon that belongs to a small number of free-standing sculptures produced during the Six Dynasties period (estimate $100/150,000). Striking for its powerful dynamism and slender elegance, the dragon, beyond its well-documented associations with the heavens and as a symbol of the emperor, also represented one of the four cardinal directions (the Green Dragon of the East). An Exceptionally Rare and Important Archaic Bronze Ceremonial Halberd Blade (GE) from the Eastern Zhou Dynasty, Early Spring and Autumn Period (estimate $200/300,000) also highlights the sale. This bronze halberd blade bears an important twenty-character inscription that reveals the name of its original owner Qu Shutuo of Chu. Twentieth century scholars, using only published ink rubbings and drawings of the present halberd, have attempted to match Qu Shutuo to members of the Qu family recorded in historical texts. The reemergence of the Chu Qu Shutuo Ge provides a great opportunity for the advancement of scholarship, as the inscription raises fascinating new questions in understanding the true identity of its original owner and the historical context surrounding him.

THE ROBERT YOUNGMAN COLLECTION OF CHINESE JADE
Auction 19 March 2019 @ 11:00AM
Sotheby’s is pleased to present jades from the private collection of Robert Youngman in dedicated auctions in both New York and Hong Kong this spring. The sales kick off in March with a sale offering more than 70 jades from the collection across 4,000 years of Chinese art, from the Neolithic to Qing dynasty.