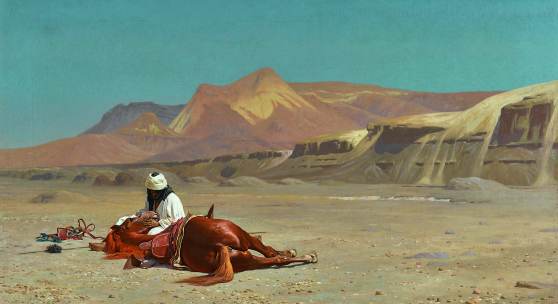 A rare masterpiece by Jean-Léon Gérôme will lead Sotheby’s annual Orientalist Sale in London. Cinematic in scale and impact, Rider and His Steed in the Desert is a unique work in Gérôme’s oeuvre. The highly charged picture captures both the stoicism of the North African tribespeople and a heroic struggle between man and nature. Estimated at £1,000,000-1,500,000, the oil is one of five works by the artist in a sale comprising 79 exceptional paintings, watercolours and sculptures that together provide fascinating historical insights into the Arab, Ottoman, and Islamic worlds during the 19th and early 20th centuries. Launched as an annual event by Sotheby’s in London in 2012 and now in its eighth season, The Orientalist Sale on 30 April 2019 will go on exhibition from 25 April alongside the Arts of the Islamic World auction, as part of Orientalist & Middle Eastern Week.

Claude Piening, Sotheby’s Head of Orientalist Paintings, commented: “We are particularly pleased with the breadth and depth of this year’s sale, distinguished by a single-owner group of watercolours of the Holy Land, North Africa and India by David Roberts, and no fewer than five oils by Jean-Léon Gérôme. Of these, Rider and his Steed, the highlight of the sale, is an especially powerful and emotional image of a moment of tenderness between man and beast against the backdrop of the sun-drenched desert. Cinematic in its conception even before the medium of film existed, with its wide-angle perspective and bright luminosity, the viewer is drawn into the scene which engages our imagination and our empathy: how have this rider and his exhausted horse ended up here? Where were they heading before they fell victim to heat and thirst? Bought at the landmark exhibition Artist Travellers at the Fine Arts Society in London in 1980, the painting is unique in Gérôme’s oeuvre in as much as he never produced other versions of répliques of the subject.”

Further works in the sale include:
Jean-Léon Gérôme, Evening Prayer, Cairo, oil on panel, estimate £600,000-800,000 – from a series of paintings depicting Muslim men at prayer produced by Gérôme in the 1860s, a signature theme of the artist’s and among his most popular Orientalist works.
Rudolf Ernst, A New Dawn, oil on canvas, estimate £250,000-350,000 – thought to be Ernst's largest known work and a veritable tour de force of Orientalist painting.
Raphael von Ambros, The Tobacco Seller, Cairo, oil on panel, 1891, estimate £200,000-300,000.
Ben Marshall, The Malcolm Arabian, together with a Dark Grey Mare in an Arabian Landscape, oil on canvas, 1825, estimate £200,000-300,000.
A superb and rare group of watercolours by David Roberts which have remained in the same distinguished private collection since they were acquired in the late 1960s and early 1970s, featuring Front Elevation of the Great Temple of Aboo-Simbel [Abu Simbel], Nubia, watercolour over pencil, November 11th 1838, estimate £70,000-100,000; Approach of the Simoon, Desert of Gizeh [Giza], watercolour over pencil, 1844, estimate £70,000-100,000; Petra, Jordan, watercolour over pencil, 1834, estimate £15,000-20,000.
Three works by Carl Haag depicting the Muslim shrine of the Dome of the Rock, on the Temple Mount in the old city of Jerusalem, a sacred site to both Muslims and Jews.
Jacques Majorelle, Aouache in Anemiter, gouache heightened with gold on canvas, estimate £100,000-150,000 – painted in a village in the Ounila valley in the Atlas Mountains, south-east of Marrakesh.
Carl Saltzmann, Leander's Tower and the Old City Beyond, Constantinople, oil on canvas, estimate £100,000-150,000 – a luminous panoramic view taking in many of Constantinople's most recognisable landmarks.