Sotheby’s to Offer Lee Krasner’s Defining Masterpiece, The Eye is the First Circle 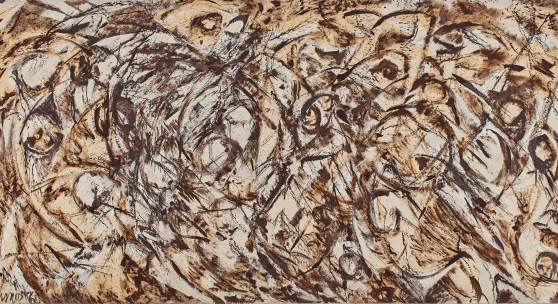 NEW YORK, 25 April 2019 – Sotheby’s is pleased to announce that we will offer Lee Krasner’s The Eye is the First Circle this spring in New York, as a highlight of our Contemporary Art Evening Auction on 16 May 2019.

Executed in 1960, The Eye is the First Circle stands today as a defining work of Krasner’s career, and a masterpiece of the Abstract Expressionist era. It is an exceptional example of the artist’s famed Umber paintings, created in Krasner’s grief following the deaths of her husband Jackson Pollock in 1956 and her mother in 1959, during which Krasner experimented with the largest canvases of her career. Spanning nearly 20 feet across, The Eye is the First Circle now represents the last large-scale work by the artist remaining in private hands. The work emerges at auction this spring after 20+ years in the same distinguished private collection.

The Eye is the First Circle is estimated to sell for $10/15 million during Sotheby’s Contemporary Art Evening Auction in New York on 16 May – poised to surpass the current auction record for Lee Krasner’s work, which was established in 2017 when her Shattered Light achieved $5.5 million.

The monumental canvas will make its public debut in Sotheby’s newly-expanded and reimagined galleries in New York, as a centerpiece of our Contemporary and Impressionist & Modern Art exhibitions that open on 3 May.

Saara Pritchard, Senior Vice President and Senior Specialist in Sotheby’s Contemporary Art Department in New York, commented: “We are thrilled to present The Eye is the First Circle this spring – a work that declares Lee Krasner’s painterly confidence and technical sophistication at the peak of her artistic powers. The work further serves as Krasner’s examination of and confrontation with her husband Jackson Pollock’s legacy as figurehead of the ‘action painters’ and the New York School. Krasner’s angst is translated on the monumental canvas in arcs of pigment that writhe, splatter, and dip across the canvas with a sense of untampered motion and force. We look forward to welcoming collectors and admirers of Krasner’s work to our new galleries this May.”

Reeling from her husband and fellow artist Jackson Pollock’s fatal car crash in 1956, followed by her mother’s passing in 1959, and the cancellation of a planned exhibition at French & Co. that same year, Krasner plunged into a new series of paintings, harnessing her emotional turmoil as a catalyst for her first monumental Umber paintings. Among the earliest examples in the series, The Eye is the First Circle was executed in Springs, East Hampton, where Krasner had moved her practice into Pollock’s former studio in the barn, which provided ample space for her to experiment on canvases far more massive than any she had previously used.

Many nights, the artist found herself unable to sleep and painted instead. Without daylight to illuminate her canvas as she worked, Krasner began to eliminate color from her palette, instead working within the nuanced range of amber, cream, and umber tones used in the present work. She consequently referred to the resulting Umber paintings as the Night Journeys. The title of the present work, The Eye is the First Circle, came to Krasner as she was struck by the half-lidded eyes which seemed to peer out from the dense thicket of pigment.

A testament to its singular importance, The Eye is the First Circle has been featured in virtually every major survey of Krasner’s work since its execution, including the 1983–84 exhibition Lee Krasner: A Retrospective, organized by the Museum of Fine Arts, Houston and the 1999–2001 survey Lee Krasner, organized by the Los Angeles County Museum of Art. Most recently, curator David Anfam selected the present work to represent Krasner in his widely-acclaimed exhibition Abstract Expressionism, organized by the Royal Academy of Arts, London and Guggenheim Museum Bilbao in 2016–17.

The work is distinguished further by its history: in a string of three separate burglaries leading up to Christmas 1991, unseen robbers stole paintings from various galleries throughout New York City. On 19 December, The Eye is the First Circle was stolen from the seventh-floor loft that served as both a home and exhibition space for John Cheim, director of the Robert Miller Gallery. Following an anonymous tip, the canvas was later recovered by police and carefully restored.