One of the Greatest Watch Collections of all Time Unveiled Today 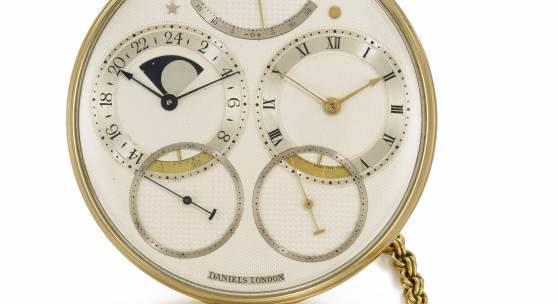 “Assembled with a keen eye and tremendous knowledge, this is a truly unique collection, shaped by years of searching for the best examples of their kind. It is a collection put together by someone who wanted to tell the story of time through watches; someone who knew his subject, trusted his eye, and had a real sense of what was ground-breaking, both in terms of technology and of artistry. If you take the scope, the variety, the depth, the innovation, the early watches, the enamels, he covered all the bases, he left no stone unturned. It’s a collection that’s unrivalled in its scope and breadth. For me, ‘Masterworks of Time’, as we’ve called it, is absolutely one of the best private collections ever formed.”- Daryn Schnipper, Chairman, International Watch Division

Highlights from one of the most important collections of timepieces remaining in private hands will be unveiled at Sotheby’s in London today. Chronicling the history of watchmaking from the Renaissance through to the present day and embracing each of the European epicentres of the watchmaking industry over time, this extraordinary collection of over 800 long-unseen pieces – unparalleled in its scope and comprehensiveness - will be offered in four dedicated sales at various locations (London, Geneva, New York and Hong Kong between July 2019 and October 2020).

Put together over a life-time dedicated to seeking out the best examples of their kind, Masterworks of Time encompasses all the ground-breaking technological and artistic innovations of the last 500 years: from early watches with German ‘stackfreeds’, to double dialled astronomical timepieces, superb enamels, form watches, musical and automata pieces, tourbillons, and complicated timepieces

Similarly, the watchmakers represented read as a ‘Who’s Who’ of international horological giants, including A. Lange & Söhne, Abraham Louis Breguet, Dent, Ferdinand Berthoud, Patek Philippe, Vacheron Constantin, Joehan Cremsdorff and Frères Rochat, through to the twentieth century horological legend, George Daniels. Each is renowned for their ground-breaking innovations and for leaving their indelible mark on the history of horology.

While watches undoubtedly represent the core of the collection, the collector’s interest in the history of timekeeping also led him to acquire an important group of clocks, spanning almost four hundred years and with emphasis on the Renaissance. From the simplest mid-16th century anonymous French timepiece to the highly advanced and complicated masterpiece clock of the early 18th century by Johan Peter Mayr, the variety of clocks brilliantly illustrates the rise of the domestic clock.

Put together over the past 50 years, this historic collection is estimated to realise £11-20m / $15-27m. The first of the four dedicated auctions, to take place in London on 2nd July 2019, will include some 160 rare and important examples of the craft, headlined by the legendary George Daniels Space Traveller I. The following day, Sotheby’s Treasures sale, will include a further selection from the collection.