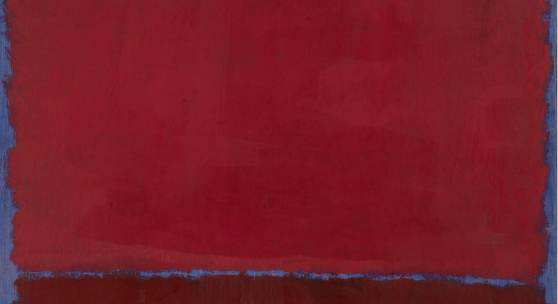 WATCH: AN INSIDE LOOK AT JONAS WOOD’S STUDIO
CHRISTOPHER WOOL’S ‘UNTITLED’
Executed in 1990, Untitled is one of the most important iterations of the five large-scale, four-letter word paintings that represent the pinnacle of Christopher Wool’s text painting production (estimate $12/18 million). The present work represents one of the most important iterations of the five four-letter words that Wool executed in the large 108 x 72 inch scale, which mark the pinnacle of Wool’s text painting production. Rare for their scale and declarative straightforward symmetry, this series includes seminal and iconic word compositions such as ‘AHAH’, ‘RIOT’, ‘TRBL’, ‘DRNK’, and ‘FOOL’, the few examples of which reside today in the world’s most significant public and private collections. At once explosive and enigmatic, the four letters of ‘FOOL’ both confront and satirize the viewer’s search for meaning. Upon closer inspection, the seemingly opaque veil of white pigment reveals the ghostly outlines of the word ‘RIOT’ emblazoned and overpainted below. Both these terms hold singular importance within the artist’s career: while Wool has revealed that ‘FOOL’ operates as a linguistic self-portrait, it is the incorporation of ‘RIOT’ that further encapsulates the rebellious energy of his painterly enterprise. By juxtaposing these two, equally-charged terms within a single painting, Wool creates a singularly arresting work that cuts to the very heart of his celebrated artistic practice.

THE HISTORY OF NOW: THE COLLECTION OF DAVID TEIGER
Sotheby’s ongoing sales of works assembled by the late visionary collector, patron and Museum of Modern Art, New York trustee David Teiger continue this May. A selection of five works by Contemporary titans long championed by Teiger including Mark Grotjahn, Dana Schutz, John Currin and more will highlight the Evening Auction, with proceeds benefiting Teiger Foundation – soon to be one of the world’s largest and most significant contemporary art foundations.

The offering is led by Jeff Koons’s monumental Elephant (Violet), a quintessential example from his widely acclaimed Celebration series (pictured right, estimate $2/3 million). Executed in 1995–2000 and acquired by Teiger in 2004, the work will be on public view for the first time as part of Sotheby’s upcoming exhibition. Part of a series of five painstakingly-rendered versions, Elephant (Violet) exemplifies Koons's levels of formal perfection achieved in the elaborate construction and demanding materials of his Celebration sculptures.

The group is highlighted further by Jenny Saville’s larger than life Reflective Flesh from 2002-3, an important and generative painting previously exhibited in the artist’s 2003 solo exhibition Migrants at Gagosian Gallery in New York (estimate $2/3 million). Standing ten feet tall and eight feet wide, the monumental work simultaneously expresses an incredible intimacy in both subject matter and sentiment. Saville frequently inserted herself into her compositions, using her own physique to explore the intimacies and intricacies of the female body. Working from photographs taken of herself in awkward and compromising positions, Saville lays her own nakedness bare, resulting in a bold, defiant, provocative and intellectual response to one of the most venerable genres of art history – the female nude.