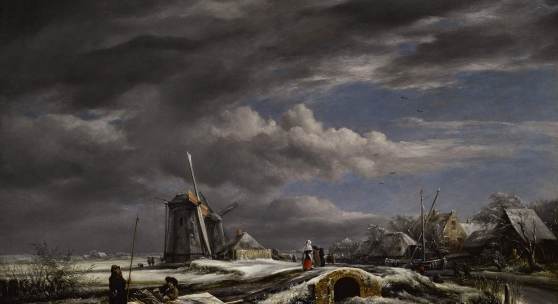 Sotheby’s Sales of 19TH CENTURY EUROPEAN ART and MASTER PAINTINGS
On May 22 to Feature:

“THE EMBODIMENT OF DREAMS”
24 Paintings Celebrating the 19th Century Cascination with the Endless Possibilities of the Imagination, the Strange and the Dreamlike
Including Works by Jean Delville, Alexandre Cabanel, John William Godward
and Sir Lawrence Alma-Tadema
**
SIR ALFRED JAMES MUNNINGS
Five Exceptional Equestrian Paintings Spanning the Artist’s Career
Marking the 50th Anniversary Since the Artist’s Death
**
WILLIAM BOUGUEREAU
Three Works to be Offered Led by La paresseuse
Emerging from the Same Private Collection Since 1939
**
17 ITALIAN RENAISSANCE PAINTINGS
Offered Without Reserve
**
JOHN CONSTABLE
A Charming Replica of Jacob van Ruisdael’s Winter Landscape
Painted 200 Years After The Original To Soothe The Artist’s Broken Heart
**
THE TRIUMPH OF LOVE
A Masterful Collaboration Between Two Leading Flemish 17th Century Painters
Jan Brueghel the Elder and Hendrick van Balen
NEW YORK, 16 May 2019 – Sotheby’s is pleased to announce highlights from our 19th Century European Art and Master Paintings auctions on 22 May in New York. These two spring sales will present nearly 200 works that reflect the rich diversity of artistic production in Europe from the 13th century to the 19th century, with estimates ranging from $7,000 – 1.5 million.

All works will be on view in Sotheby’s newly-imagined and expanded York Avenue galleries beginning on 18 May.

The morning auction of 19th Century European Art is led by The Embodiment of Dreams, a collection of paintings, works on paper and sculptures that celebrate 19th century artists’ fascination with the aesthetic possibilities of imagination and invention. Inspired by the heroes and goddesses of ancient myth, magic and the explorations of exotic lands, the era’s artists and their patrons were entranced by the strange, the new, the dreamlike. Daring interpretations of ancient mythology include Franz von Stuck’s Dionysos (estimate $30/50,000) and Jean Delville’s epic and monumental Orphée aux enfers (estimate $100/150,000). Alexandre Cabanel’s dramatic recreation of Shakespeare’s Portia (estimate $150/200,000) and evocative scenes of Greco-Roman culture by John William Godward and Sir Lawrence Alma-Tadema envision worlds never before realized.

The sale also features three exceptional paintings by William-Adolphe Bouguereau, led by La paresseuse (estimate $600/800,000). As with many of Bouguereau’s paintings, La paresseuse was sold soon after its completion in 1901 to an American collector and has remained in the same family since 1939. The powerful relationship between Bouguereau, his work, and his wealthy patrons throughout the United States is the focus of the current Bouguereau & America exhibition at the Milwaukee Museum of Art.

Featured in the Salon of 1884, Julius LeBlanc Stewart’s Five O’Clock Tea (estimate $1/1.5 million) is an excellent example of the artist’s celebrated renderings of Belle Époque Paris. Known throughout his career as the “Parisian from Philadelphia,” Stewart was part of a glittering social circle of expatriates, business moguls, aristocrats, artists and actors, among them actresses Sarah Bernhardt and Lillie Langtry, Anthony J. Drexel, founder of Drexel, Morgan and Company (later J.P. Morgan) in New York, and James Gordon Bennett, the eccentric founder of The New York Herald and later the International Herald Tribune. Set in a sumptuous drawing room, the eclectic decorations in Five O’Clock Tea demonstrate the vogue for japonisme during the Aesthetic Movement of the late-nineteenth century. Among the fashionably dressed guests are two recognizable portraits: a self-portrait of the artist at far left, and the artist’s collie Jinny at right, eagerly awaiting the lucky drop of a crumb.

The May sale also features a superb group of pictures by Sir Alfred James Munnings, whose legacy as one of the most important equestrian artists continues to be celebrated in 2019,  the 50th anniversary of his death. The group is led by Evening at Mendham (The Ford) (estimate $250/350,000), a 1909 work focusing on Munnings’ life-long study of the effects of light and water and featuring his favorite equine model Auguereau. The frieze-like The Queen’s Horses: "Corporal," "Biscuit," and "Aureole" (estimate $200/300,000) depicts three thoroughbreds from Queen Elizabeth’s stables, including Aureole, whose wins in the 1954 season made Queen Elizabeth the leading horse owner in Britain in 1954, the first time a reigning sovereign had topped the winner’s list.

This spring’s sale of Old Master Paintings is comprised of an exceptional array of works from schools throughout Europe that span the 13th to the 19th centuries. The opening section of the sale features seventeen Italian paintings from a distinguished private collection that span 500 years of art history, including a 13th century gold-ground depicting St. Margaret, The Madonna And Child, And The Crucifixion With Mourning Saints by the Master of the Magdalen (estimate $300/500,000), an impressive tondo of the Madonna and Child by Mariotto Albertinelli (estimate $300/500,000), and a tender depiction of the Madonna and Child by Milanese artist Bernardino de' Conti (estimate $200/300,000). This group of paintings will be offered without reserve.