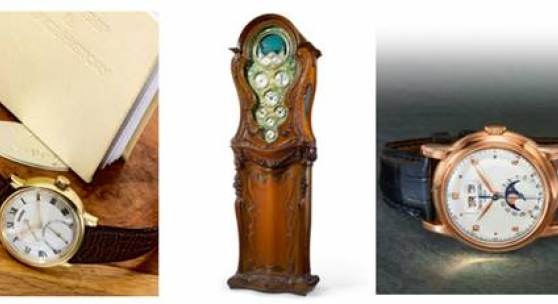 Just in Time for Father’s Day & Spring Graduations:
The Rolex Daytona Capsule Collection
in Partnership with Bob’s Watches
*Online-Only Auction Open through 30 May*

NEW YORK, 29 May 2019 – Sotheby’s annual spring auction of Important Watches in New York on 4 June 2019 will feature an outstanding selection of vintage and modern timepieces emerging from impressive private collections, and representing an array of top makers including Patek Philippe, Rolex, Jaeger-LeCoultre, Audemars Piguet and more. With estimates ranging from $2,000 to over $500,000, the 240+ pieces on offer will open for public exhibition in Sotheby’s New York galleries on 31 May, alongside the auctions of Important Jewels.

The June auction is distinguished by a collection of exceptional timepieces assembled by a discerning and thoughtful Midwest collector who had a keen eye for quality from the top makers in the industry, focusing on specific brands and references within a makers’ oeuvre. On offer on behalf of a Charitable Estate, proceeds from the sale will be used to support medical research at Washington University in St. Louis.

The collection is highlighted by two exceptional Reference 2499’s by Patek Phillipe, led by a Rare and Highly Important Yellow Gold Perpetual Calendar Chronograph Wristwatch with Moon Phases, Retailed by Tiffany & Co. from 1984. On offer from the original owner and appearing at auction for the first time, the watch is the only known fourth series Ref. 2499 signed by Tiffany to the best of our knowledge (estimate $300/500,000). Beginning their partnership in 1851 with a handshake between Antoine de Patek and Charles Lewis Tiffany in 1851, Tiffany & Co. remains the only retailer in partnership with Patek Philippe today, and thus, the only firm which can still co-sign the dial of a Patek Philippe watch.

A Rare Yellow Gold Perpetual Calendar Chronograph Wristwatch with Moon Phases made in 1984 represents one of only 349 examples manufactured over 35 years of production, consequently remaining one of the most sought-after wristwatches (estimate $250/350,000). Based on our research, the watch as never been offered at auction – therefore an extremely rare opportunity to own a fresh-to-the-market piece.

Originally ordered by William Henry Vanderbilt, a Tiffany & Co Important Wood Brass Steel and Abalone Astronomical Repeating Tall Longcase Clock Made for the World’s Columbian Exposition in 1892 represents one of the most complicated clocks made in America ($150/250,000). In 1897, Tiffany & Co. exhibited this piece at the 1893 World’s Columbian Exposition in Chicago, where it was one of the most important pieces on view. Signed by Tiffany & Co. makers, the present clock is a marvel of American woodworking, design and horology.

The sale also offers a Cartier Day and Night Comet Clock circa 1925 created by clockmaker Maurice Coüet, who exclusively crafted table clocks for Cartier (estimate $100/150,000). Featuring a beautiful night sky theme with gold stars, the example is on offer from the descendant of the original owner and is in excellent condition.

The June auction will offer an exceptional selection of timepieces by independent makers, including Laurent Ferrier, Richard Mille, and Roger W Smith.

The selection is highlighted by a Roger W Smith Series 2 Rare Yellow Gold Wristwatch with Power Reserve Indication and Co-Axial Escapement circa 2008 (estimate $100/200,000). In 1987, Smith met master horologist Dr. George Daniels while attending the Manchester School of Horology. Daniels presented each of his students at the time with his iconic Space Traveller pocket-watch, consequently inspiring Smith to become a watchmaker. Smith later became Daniels only apprentice and mastered 32 trades of British watchmaking to become worthy of collaborating with the great master himself. Known as “The Daniels Method”, Smith created stunning timepieces exquisitely built and finely finished using nothing but his bare hands.

The auction features an exceptional selection of complicated Patek Phillipe timepieces, led by a Ref 2497R – A Rare Pink Gold Perpetual Calendar Center Seconds Wristwatch with Moon Phases made in 1954. Groundbreaking for Patek Philippe as well as the horological community, Reference 2497 was produced between 1951 – 1963, with less than 200 pieces made, and only roughly 20 of these encased in pink gold.