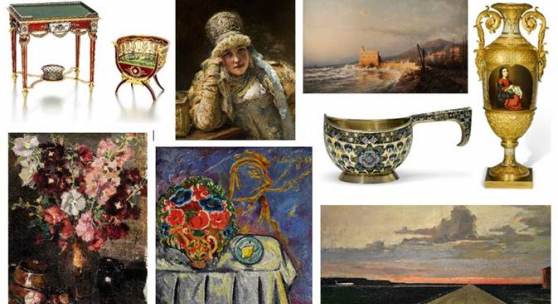 24 May 2019: From Fabergé and Feodor Rückert to Alexei Bogoliubov and Konstantin Makovsky, works by Russian Masters will come together in London this season for Sotheby’s Russian Art sales on 4 June.

Featuring works by some of the most well-known names in Russian art from the 1830s to the present day, the Russian Pictures sale will present a particularly strong offering of 19th century paintings, including a number of works offered at auction for the first time. The sale is led by a rare Russian- period canvas by one of the country’s most influential avant-garde artists, Mikhail Larionov whose Still Life has not been seen in public for over 60 years.

The Russian Works of Art, Fabergé and Icons sale will once again illustrate the broad spectrum of traditional Russian craftsmanship and will be highlighted by rare and sought-afterobjets de fantaisie created by none other than Fabergé. Exceptional examples of beautifully enamelled kovshi, delicate vertu pieces, silver, bronzes and Soviet porcelain will further distinguish the sale. The sales follow in the wake of strong results for Russian art at Sotheby’s in 2018. The November sale series alone, which included the sale of the private collection of the musical geniuses Mstislav Rostropovich and Galina Vishnevskaya, realised $29.4 million (£23 million)– the highest total across all Russian sales that season - and saw a number of artist records broken, including for Konstantin Makovsky, and Georgian artist, Niko Pirosmani. The Russian works of art sale also saw outstanding results with pieces such as a Feodor Rückert kovsh selling for many times over their pre-sale estimate.

Mikhail Fedorovich Larionov, Still Life (Lot 56) Estimate: £1 – 1.5 million
This rare, large-scale still life with by one of Russia’s most influential avant-garde artists has not been on public display for over sixty years since it was acquired by its current owner in the 1960s. Painted in Russia before Larionov’s departure for Europe, the painting has most in common with the works of his Soldier and Turkish series of 1910- 1912, the culmination of the artist’s neo-primitivist period. The flattened face with text in the upper right of the composition has its origins in the shop signs the artist incorporated in his earlier works. The text deliberately resembles graffiti scrawled across the canvas, a joyfully crude device first seen in his depictions of soldiers, prostitutes and bawdy barrack life, a result of his year of military service in 1910/11.

Boris Mikhailovich Kustodiev, Portrait of Count Alexei Pavlovich Ignatiev, 1902 (Lot 54) Estimate: £250,000 – 350,000
This painting is a study for the Ceremonial Meeting of the State Council on May 7, 1901 – a large-scale canvas that was conceived and eventually completed by artist, Ilya Repin. Painted on the commission of Tsar Nicholas II to commemorate the centenary of the State Council, the work stars as a highlight of the artist’s major retrospective currently on exhibition the Tretyakov Gallery in Moscow. At the time the work was painted, Repin was at the peak of his career and accepted the colossal task with enthusiasm, however, having trouble with his right hand, he hired two assistants, including Kustodiev, to aid him. In preparation for the piece, Repin and his two students executed a great number of studies and sketches to capture the exact poses and facial expression of the members of the Council. This painting depicting Count Alexei Pavlovich Ignatiev, Governor-general of Kiev, Podol, Volhynia and Irkutsk, is one of 27 preparatory portraits completed by Kustodiev. It was met with immediate success and has been exhibited widely in both Russia and Europe, including the Venice Biennale in 1907, and the exhibition of Russian art in Vienna which took place at the iconic Secession building.

Alexei Petrovich Bogoliubov, Sunset in Stormy Weather, Menton, 1885 (Lot 4) Estimate: £180,000 – 220,000
One of the most prominent 19th century Russian seascape artists, Bogoliubov often spent the winter months making studies in Menton, on the Côte d’Azur. Depicting an ancient coastal fort in the centre, this striking seascape exemplifies the artist’s ability to precisely depict the details of everyday life. Exhibited at the 14th Itinerant Art Exhibition in St Petersburg and Moscow, the picture was mentioned in almost every review of the exhibition, noting the artist’s ‘marvellous technical skill’.

Vasily Dmitrievich Polenov, The Oyat River (Lot 34) Estimate: £450,000 – 650,000
The only one of the five known views of the Oyat River by the artist not to currently reside in a public Russian collection, this painting is appearing on the market for the first time in over a decade. One of Russia’s finest landscape artists, Polenov was a highly regarded and popular artist of his time whose works were collected by members of the Imperial family.

onstantin Egorovich Makovsky, Boyarina (Lot 14) Estimate: £80,000 – 120,000
An artist who delighted in beauty, Makovsky was one of the most in- demand society portrait painters of his day. Renowned for his nostalgic historic paintings, Makovsky was attracted to the subject of pre-Petrine ruling class of the Boyars, and from the 1880s the subject gradually supplanted all others with his portraits of Boyarinas proving the most popular of all. Exemplifying the sheer delight the artist took in depicting the luxurious furs, extravagantly piled-on jewels and heavily- embroidered costumes, this painting is of supreme quality, and is appearing on the market for the first time.