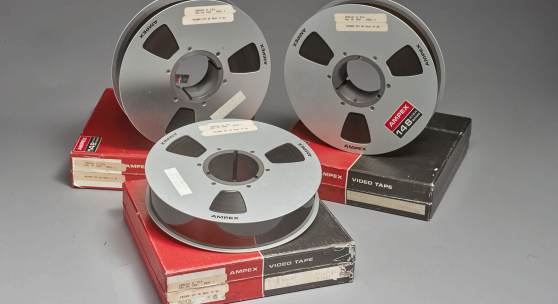 NEW YORK, 28 June 2019 – This July, Sotheby’s will offer the earliest, sharpest, and most accurate surviving video images of man’s first steps on the moon: three original NASA videotape recordings of the Apollo 11 lunar landing.  Unrestored, unenhanced, and unremastered, the significance of the videotapes was recognized during NASA’s fruitless search at the time of the 40th anniversary of the lunar landing for its original SSTV recordings.

The tapes will headline our auction dedicated to Space Exploration on 20 July in New York – the 50th anniversary of the Apollo 11 lunar landing – when they are estimated to sell for $1/2 million. At a combined run time of 2 hours and 24 minutes, they capture everything from Neil Armstrong’s declaration: "That's one small step for a man, one giant leap for mankind,” marking the historic moment the first human set foot on another world, to the “long distance phone call” with the President of the United States, and the planting of the American flag.

The Space Exploration auction will open for public exhibition on 13 July alongside, Omega Speedmaster: To the Moon and Back – an auction dedicated to the official watch of NASA.

The present videotapes are the only surviving first-generation recordings of the historic moon walk, and are sharper and more distinct than the few tapes that have survived from the contemporary network television broadcasts – all of which endured some loss of video and audio quality with each successive transmission from microwave tower to microwave tower.

Viewed only three times since June 1976 (perhaps the only times since they were first recorded late in the evening on 20 July 1969 at NASA’s Mission Control Center, Houston, Texas), the three reels of 2-inch Quadruplex videotape transport viewers to the big screen monitor at Mission Control, which displayed clearer images with better contrast than those that the more than half-billion-person television audience witnessed that momentous July day on their home sets. Home viewers watched video that had been transmitted over a 1,600-mile relay of microwave transmission towers to the major television networks in New York City, with each transfer causing a bit of deterioration to the picture quality. In contrast, Mission Control saw the same video that is on these 2-inch Quadruplex videotapes: moving pictures sent directly to Houston from closed circuit TV transmissions from the lunar surface beamed to 64-meter-diameter radio telescopes at the Parkes and Honeysuckle Creek Observatories in New South Wales and Canberra, Australia, respectively, and NASA’s own similar-sized antenna in Goldstone, California.

Cassandra Hatton, Vice President & Senior Specialist in Sotheby’s Books & Manuscripts Department, commented: “The successful lunar landing of Apollo 11 captured the world’s attention 50 years ago, uniting us in a collective belief in the unlimited potential of mankind. From neighbors gathered around a television set to the cosmonauts in Star City and the astronauts and engineers in Houston, this was a unique event in history that people from all walks remember with excitement and positivity. And what we universally recall about that event is best documented on these tapes – a glorious moment that united the people of earth in peace, as witnesses to mankind’s greatest achievement.”

This direct transmission originated from a Westinghouse TV camera that NASA had commissioned specifically to transmit images back to Earth from the lunar surface. Since the camera had to be deployed before Armstrong and Aldrin exited the Lunar Module (LM) if it was truly going to capture their first steps on the surface of the moon, the camera was stowed in a shock-proof and insulated mount on the LM’s Modularized Equipment Stowage Assembly (MESA). Armstrong released the MESA when he first peered out of the LM, so that the camera would be in position to capture his slow descent down the ladder and onto the lunar surface. The two astronauts later removed the camera from the LM and mounted it on a tripod to capture a wider view of the LM and their activities and experiments.

The Westinghouse lunar-surface camera shot ten frames per second, using only one-tenth of the bandwidth of the 30-frames-per-second format then standard for television broadcasts (known as NTSC). The transmissions to Earth began when Buzz Aldrin engaged the Westinghouse camera circuit breaker. While the crew was prepared to deploy an erectable S-Band antenna to facilitate transmission, that proved unnecessary: since they landed in alignment with the receivers at Honeysuckle Creek and Goldstone, they were able to transmit the video directly back to Earth using an adjustable high-gain antenna on the Lunar Module.

The high-resolution TV images received at the Parkes Observatory were recorded onto a total of forty-five large diameter reels of narrow-band slow scan (SSTV) videotape. The images were simultaneously transmitted from Australia to NASA Mission Control in Houston, where they were converted to NTSC for network broadcast, and recorded using Ampex VR-660B video recorders onto 2-inch wide reel-to-reel Quadruplex videotape, including the present videotapes on offer.