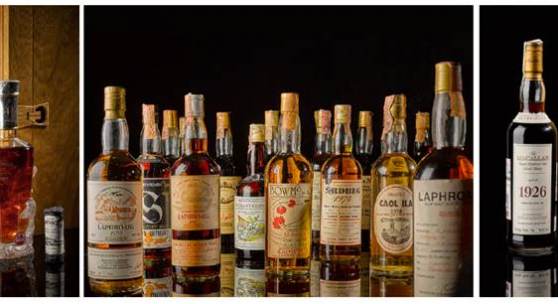 London, 5 September 2019 – With collectors’ thirst for the finest and rarest examples of Scotch whisky increasingly reaching new heights, this autumn Sotheby’s will present The Ultimate Whisky Collection, the most valuable collection of whisky ever to be sold at auction, and the Company’s first single-owner offering of spirits. Showcasing the most comprehensive range of desirable Scotch whisky to come to the market from a private ‘cellar’, the collection is estimated to bring in the region of £4 million ($4.8 million).

The sale will open for online bidding on 27 September 2019 and culminate in a live auction on 24 October at the Olympia event space in West Kensington, London, alongside RM Sotheby’s sale of collectible motor cars on the same day, an annual highlight on the European collector car calendar since 2007.

The Ultimate Whisky Collector had always remained fascinated by each and every expression of Scotch whisky and though he acquired and enjoyed a wide range, he naturally established several favourites along the way. Whiskies from Bowmore, Highland Park and especially The Macallan captured his heart and top bottles from these distilleries became his focus. During his pursuit, the collector met and developed a relationship with U.S. based whisky specialist Jonathan Read who has played an important role in developing this collection. Together, they sought to identify and complete important verticals as well as delve into the vast world of Scotch whiskies bottled decades ago.

“THE ‘HOLY GRAIL’ OF WHISKY”
The Ultimate Whisky Collection is defined by its strong representation of The Macallan bottlings. Comprising half of the lots in the sale and with a combined estimated value in excess of £2.2 million, this is the most comprehensive collection of the Macallan Fine and Rare series ever offered at auction. The outstanding line-up is headed by the originally-labelled 60 years old The Macallan 1926 from cask #263. Cask 263 yielded only 40 bottles, considered the ‘holy grail’ of whiskies; 12 bottles were labelled by Peter Blake, 12 by Valerio Adami, and two bottles were sold individually and given private labels, one of which was hand-painted by Irish artist Michael Dillon. The remaining 14 were bottled as the anchor for the Fine and Rare series and labelled as such, making them the oldest bottles in the iconic ‘Fine and Rare’ series, both by age and by vintage. In the last two years, three versions containing liquid from Cask 263 have all broken records at auction, but the fourth bottling from this cask has not been seen at auction for over a decade. The Macallan 60 Years Old, Fine & Rare Series is the only bottle required to complete both the full collections of bottlings from cask 263 and the Fine and Rare vertical, a series to which The Macallan is continuing to add releases annually.

THE COLLECTION AT A GLANCE
A 178 bottle-strong collection of Fine and Rare spanning seven decades, from 1926 through to 1991. The originally-labelled 60 years old The Macallan 1926 from cask #263. Two complete Macallan in Lalique Six Pillars Collections presented in bespoke, hand-made cabinets commissioned by Sotheby’s and designed by British craftsman James Laycock. A rare collection of Macallan Fine and Rare Miniature bottles in an exclusively commissioned lockable wall-mounted cabinet, also designed by James Laycock.

Highland Park’s 50 year old designed by Edinburgh-born jeweler, Maeve Gillies, alongside other notable Highland Park lots such as the Orcadian Vintage Series releases from 1964, 1968, 1970, 1971 and 1976. A selection of some of the finest casks available for sale, including such peated rarities as both Bowmore and Laphroaig casks from 1995, and Bruichladdich’s Octomore, distilled in 2012; barrels and Hogsheads from legendary distilleries such as Dalmore, Bunnahabhain and Clynelish; the Highland Park First Fill Oloroso Sherry Cask and Springbank First Fill Oloroso Sherry Cask.