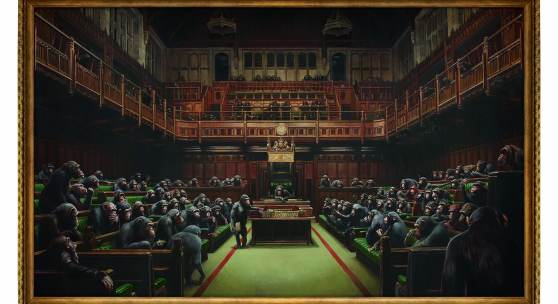 BANKSY: “LAUGH NOW, BUT ONE DAY NO-ONE WILL BE IN CHARGE.” “Devolved Parliament” Banksy’s Dystopian View of The House of Commons Overrun with Parliamentary Primates To go on Public Display in London for the First Time on Brink of Brexit Deadline Ahead of the Painting’s Auction at Sotheby’s with an Estimate of £1.5 - 2 Million

15 September 2019, London: Banksy’s derisive portrayal of The House of Commons reduced to an assembly of parliamentary primates, will go on public display in London for the first time at Sotheby’s just a mile away from The Palace of Westminster. The exhibition will run from September 28 – October 3, ahead of the next scheduled ‘Brexit Day’. Spanning an impressive thirteen feet, this is the largest known canvas by the anonymous street artist whose subversive practice has granted him a reputation of infamy as much as world renown.

The exhibition of Devolved Parliament (2009) will be followed by an auction on the evening of October 3, in which the painting is estimated to sell for between £1.5-2 million ($1.8-2.46 million). The sale comes exactly a year after Banksy himself intervened in a Sotheby’s auction, when ‘the nation’s favourite artwork’ Girl with Balloon auto-destructed as the gavel came down on 5 October 2018, to become the freshly titled Love is in the Bin, marking the first time an artwork has been created during a live sale.

Born and bred in Bristol in 1973, artist-provocateur Banksy has become an international phenomenon for his dissident style, dark humour, and political commentary on all aspects of contemporary life – from the European immigration crisis, to climate change, the treatment of refugees, and most recently Brexit and the European Union.

His work fits firmly into the venerable history of political parody, from William Hogarth’s portrayal of the controversy, corruption and chaos of 18th-century, to George Orwell’s revolutionary Animal Farm and the political cartoonists of today. In the artist’s own words: “Art should comfort the disturbed and disturb the comfortable” (a play on American satirist Finley Peter Dunne’s declaration that the duty of a newspaper is to “comfort the afflicted and afflict the comfortable.”)

Banksy first unveiled Devolved Parliament a decade ago as part of his ground-breaking Banksy vs. Bristol Museum exhibition, which famously drew over 300,000 visitors to become one of the world’s top ten most-visited shows of 2019. More recently, the painting returned to the spotlight once again for another showing in Bristol to mark the date originally intended for “Brexit Day”, March 29 2019. The artist took to Instagram at the time to explain: “I made this ten years ago. Bristol museum have just put it back on display to mark Brexit day. “Laugh now, but one day no-one will be in charge”.

Banksy’s Instagram recalls the first appearance of chimpanzees in his work, Laugh Now (2002), a painting which made headlines when it broke the artist’s auction record in 2008. Measuring six-metres long, the painting shows a row of subservient apes wearing aprons carrying the inscription ‘Laugh now, but one day we’ll be in charge’. The motif has since become one of Banksy’s most widely disseminated images. As the artist has remarked with characteristically dry wit: “You paint 100 chimpanzees and they still call you a guerrilla artist.”