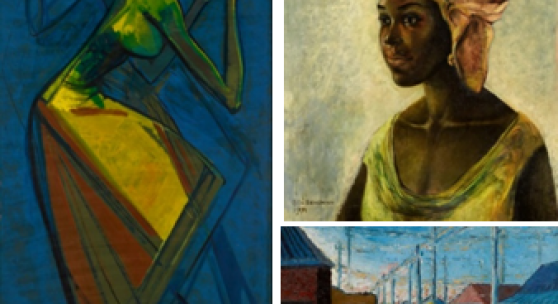 26 September 2019, London: This October, an enchanting rediscovered portrait by pioneering Nigerian master Ben Enwonwu will star in Sotheby’s sale of Modern and Contemporary African Art in London. A portrait of the artist’s close friend, Christine will appear at auction for the first time with an estimate of £100,000-150,000, having remained largely unseen in the sitter’s family home since its creation in 1971. It will be presented to the public as part of the pre-sale exhibition in London from 11-15 October (34-35 New Bond Street, W1S 2RT).

Lost to historical record until now, Christine is a radiant portrayal of Christine Elizabeth Davis – an American hair stylist of West African descent, who was a close friend of the artist, and the present owner’s late step-mother. Although cherished by Christine’s family for its sentimental value, they were unaware of the supreme importance of the artist or the painting, until a chance ‘googling’ of the work led the family to Sotheby’s free Online Estimate Platform.

Christine will star alongside a revered work by Enwonwu’s contemporary Gerard Sekoto, with whom he shared a studio in Paris in 1946. Largely responsible for the establishment of African Modernism, the pair are often considered among the most important artists of the 20th century. Sekoto’s relocation to Sophiatown, Johannesberg, in 1939, marked the beginning of his eminent career. His work sought to document the dramatic social change of the time, and the harsh socio-economic reality of life in black urban areas in the years preceding the apartheid. A highlight of the forthcoming sale,Cyclists in Sophiatown shows a line of men commuting to work by bicycle, leaving the township under a transient early morning sun. The prohibitive costs of car ownership and the lack of public transport meant cycling was the default, and therefore a low-status, mode of transport for the poor and oppressed black working-class South Africans.

Further highlights in the sale include works by El Anatsui and Ibrahim Mahama, both of whom represented Ghana in its prominent debut pavilion at the Venice Biennale earlier this year, alongside William Kentridge, Chéri Samba, Boris Nzebo, Abdoulayer Aboudia and Monsengwo “Moke” Kejwamfi. Speaking about the sale, Hannah O’Leary, Sotheby’s Head of Modern and Contemporary African Art said: ‘This season’s sale is very special, not only due to the number and variety of works on offer, but also because of the wonderful stories and supreme historical importance which accompanies them. Opening with the earliest work by Albert Lubaki to Hassan el Glaoui, Salah Elmur and Ben Enwonwu whose mesmeric portrait of Christine has blown us away. It’s an incandescent and truly masterful rendering of the sitter’s late stepmother and to be able to show this portrait side-by-side with Gerard Sekoto’s ‘Cyclists in Sophiatown’ is a real honour. They will appear alongside rising masters of the Contemporary scene, including two works by Eddy Kamuanga Illunga, who has risen to new heights in recent years, and pioneering female artists, Maïmouna Guerresi and Seyni Awa Camara.Since establishing these sales at Sotheby’s in 2017, we’ve achieved 60 new records for artists hailing from across the continent, spanning a kaleidoscope of cultures and themes. It’s an incredibly exciting time, and as African artists surge to the forefront of public and private collections across the globe, we can only hope to raise the bar even higher this season’.