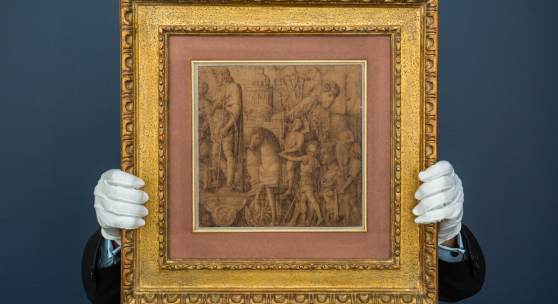 NEW YORK, 3 October 2019 – Sotheby’s is honored to announce that it will offer one of the most art-historically important drawings ever to appear at auction: Andrea Mantegna’s only known preparatory drawing for one of the canvases in the Triumphs of Caesar, the Italian Renaissance artist’s most influential and revered work. Recently rediscovered, the masterwork will headline Sotheby’s Old Master Drawings auction in New York on the 29th of January 2020, when it is estimated to fetch in excess of $12 million.

Andrea Mantegna (c. 1431-1506) was one of the most innovative, influential and celebrated artists of the Italian Renaissance. His importance was very recently underscored by the major exhibition, Mantegna and Bellini, dedicated to his work and that of his brother-in-law Giovanni Bellini, held at the National Gallery, London, and the Gemäldegalerie, Berlin. Approximately 20 drawings by Mantegna are known, all except two (including the present work) are in the collections of major museums, such as the British Museum in London. The sale of this drawing is of enormous significance: only two other drawings by Mantegna have appeared at auction in the last half century.

Dated to the late 1480s, the drawing is the only known preparatory study for Mantegna’s famed and celebrated masterpiece, the Triumphs of Caesar – a series of nine monumental paintings depicting the triumphal procession of Julius Caesar and his army through ancient Rome. The paintings are part of the British Royal Collection at Hampton Court Palace, where they have resided since they were acquired by King Charles I in 1629. The King bought the paintings directly from the Gonzaga family, Dukes of Mantua, who were Mantegna’s most important patrons.

The present pen and ink drawing is a study for ‘The Standard Bearers and the Siege Equipment,’ which is the second canvas in the Triumphs series. The drawing theatrically recreates a section of the processional that includes gigantic statues on carts, a model of the tower of Alexandria, and oversized siege weapons.

Though sold as an autograph work by Mantegna in 1885, the drawing subsequently disappeared into private collections, and was totally unknown to scholars until shortly before the Mantegna and Bellini exhibition in London and Berlin. Its inclusion in that exhibition caused much excitement, but only since the exhibition have other extremely significant aspects of the drawing been identified, following further careful research by Cristiana Romalli, Senior Director and Italian specialist in Sotheby’s Old Master Drawings Department. On the basis of new technical analysis using infrared photography, performed by Sotheby’s Department of Scientific Research, Romalli was able to establish that the main figure on the left side of the composition was altered very significantly during the process of the drawing’s creation. Underneath the figure of Aesculapius, the Greek god of medicine, which appears in the finished drawing and the final painted version, there is actually another entirely different figure, identified by Romalli as Helios, the Roman god of the Sun, which the artist chose to obliterate and replace as he developed his composition.

This change conclusively proves that Mantegna himself was the author of the drawing, and this remarkable and unexpected discovery sheds exciting light on Mantegna’s restless working method, in which he continued to edit, refine and perfect his compositions, even in the final stages. Moreover, it is unquestionable proof that this is the only known surviving preparatory study for the Triumphs.

Speaking of the drawing, Cristiana Romalli said: “The discovery of a previously unseen underdrawing, more than five hundred years after it was made, is a moment of considerable importance for the study of this complex, intriguing and highly influential master of the early Italian Renaissance. By examination under special filtered infrared light, we were able to detect the hidden figure of Helios, revealing a major change in the composition that proves Mantegna’s authorship. This change in fact defined his whole approach to the finished painting that we see today. The exceptional and rare opportunity to bring to light this news, obscured for centuries, is what defines the excitement and thrill of the drawings market. It is a great privilege to be handling the sale of a drawing of such extraordinary importance and rarity.” The drawing will be on view in Hong Kong, Los Angeles, San Francisco and London before returning to New York for exhibition beginning 24 January.