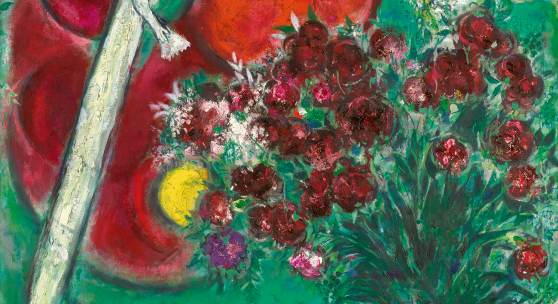 NEW YORK, 7 October 2019 – Sotheby’s is pleased to announce that we will present Everything you can imagine is real: Property from an Important Private European Collection as a highlight of our marquee Impressionist & Modern Art auctions this November in New York.

This distinguished group of 35 works represents one of the greatest and most renowned collections of a generation, offering a richly varied selection that includes paintings, works on paper and sculpture by icons of the late-19th and 20th centuries, such as Alberto Giacometti, René Magritte, Claude Monet, Henry Moore, and Pablo Picasso, among others. In particular, the collection features six outstanding works by Marc Chagall that span nearly 70 years of the artist’s oeuvre, and five paintings by Fernand Léger that chart more than 30 years of his artistic output.

Having been acquired primarily in the 1980s and ‘90s with both a fierce passion for art and intelligent connoisseurship, this diverse selection of works encapsulates the great reappraisal of Impressionist and Modernist art, and will appear at auction this November for the first time in over 20 years. Amassed by a self-made entrepreneur, the collection serves as a testament to the foresight of a discerning collector was one of few to forge a fresh, avant-garde approach to collecting at that time. The resulting group shines a light on the “golden age” of Modernism and illustrates a shift in the market at that time towards the abstract, Surreal, even conceptual visions of the artists of the early-20th century.

HIGHLIGHTS FROM THE COLLECTION

A brilliant wash of emerald green and crimson red, Fleurs de St. Jean-Cap-Ferrat belongs to a body of work created by Marc Chagall following World War II, featuring several motifs that would remain central to Chagall’s late oeuvre (estimate $2.5/3.5 million). Lighter, renewed tapestries of couples, flowers and animals began to replace Chagall’s darker, religious and Holocaust-related works. The bottom portion of the canvas is devoted to the placid coastline of the work’s titular town, Saint-Jean-Cap-Ferrat, situated on a picturesque peninsula southeast of Nice, which served as the locus of Chagall’s artistic rebirth in 1949.

Painted in 1948, Le Cicérone is an enigmatic encapsulation of key themes René Magritte had incorporated into his art during the decades prior (estimate $2/3 million). The Belgian artist would continue to incorporate his signature cooptation of imagery and mysterious juxtapositions in his work until his death in 1967. The present composition features a number of motifs familiar to Magritte’s oeuvre, with its curious protagonist theatrically posed beside a moonlit ledge overlooking the water. However fanciful such readings of Magritte’s work may be, the artist famously rejected interpretation of his scenes, occasionally deriding those who posited such explanations.

Influenced by the Purist aesthetic promulgated by Le Corbusier and Ozenfant, as well as the object-driven assemblages of the Surrealists, Fernand Léger’s still lifes from the late 1920s-30s present carefully-crafted collections of familiar forms, gathered together to achieve the greatest balance in both color and composition. Léger’s Nature morte à la pipe sur fond orange removes its constituent parts from their rational, typical contexts, employing recognizable figures like keys, letters, leaves and pipes primarily for their linear qualities (estimate $1.2/1.8 million). Such objects would become visual mainstays of Léger’s work in the following years, serving as building blocks for his myriad still life compositions.