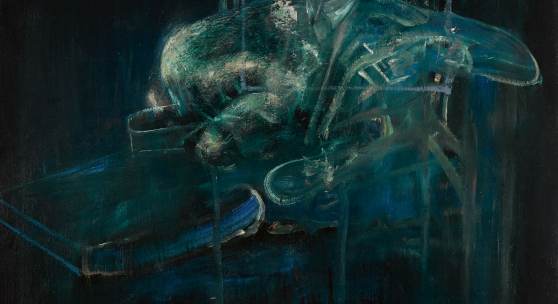 NEW YORK, 15 October 2019 – Sotheby’s is honored to announce that we will offer Francis Bacon’s Pope on behalf of the Brooklyn Museum this November in New York. Proceeds from the sale will be used to support the museum collection.

Executed during a particularly turbulent and emotional moment of Bacon’s life, Pope offers a rare glimpse into the psychology of the artist and the influences behind the works he created during a passionate yet volatile love affair with Peter Lacy. In the mid-1950s, Lacy moved to Tangier, prompting Bacon to make frequent and extended trips to Morocco to spend time with his lover, among a group of important creative figures such as Allen Ginsberg and William Burroughs. Perceived as exotic and more tolerant of homosexuality, the Tangier lifestyle offered an escapism that was liberating for both Bacon and Lacy. Despite this, their romance ultimately devolved into violence, which characterized a period of great psychological angst for the artist.

Bacon was particularly prolific during his stints in Morocco. However, he ultimately destroyed the majority of the paintings he created in Tangier – perhaps as a way to separate himself completely from the memory of his calamitous relationship with Lacy. The present Pope is one of only six Tangier Paintings that survive, five of which Bacon gifted to his friend Nicolas Brusilowski in 1959, hoping that he may be able to reuse the canvases. Brusilowski instead preserved these works, which later made their way into notable private collections worldwide. The sixth work now resides in the Musées Royaux des Beaux-Arts in Brussels.

Brusilowski sold the present Pope to legendary Swiss dealer Jan Krugier, and the work was subsequently acquired from his Galerie Krugier et cie in Geneva by American collector Olga H. Knoepke in 1967. In addition to her significant holdings of art, including works by such masters as Edward Hopper, George Tooker and Lucian Freud, Knoepke was a pioneering businesswoman, who helped found a plastics factory in Brooklyn, New York. She gifted the work during her lifetime to the Brooklyn Museum in 1981, where it has resided until present.

Prior to Sotheby’s November auction, only two of the six surviving Tangier Paintings have ever appeared at auction. The most recent – another Pope – was sold at Sotheby’s Paris in 2008, for $7.3 million (estimate $3.2/4.7 million). The full group of Tangier Paintings is included in the authoritative catalogue raisonné of Francis Bacon’s work, edited by Martin Harrison and published in 2016.The present work arrives at auction this November following Sotheby’s sale of another outstanding example of Bacon’s Popes, Study for a Head, which achieved $50.4 million in our Contemporary Art Evening Auction in May 2019.

Pope will be exhibited publicly in Sotheby’s New York galleries beginning 1 November. The painting is estimated to sell for $6/8 million in Sotheby’s Contemporary Art Evening Auction on 14 November 2019.

Grégoire Billault, Head of Sotheby’s Contemporary Art Department in New York and former researcher for The Estate of Francis Bacon, commented: “Pope offers an exceedingly rare glimpse into Francis Bacon’s psychological state during a prolific but ultimately tortured time in his life and career. Tangier represented the artist’s first travels outside of Europe, and the promise of an open life with Peter Lacy. But their relationship proved volatile and violent, which found expression in Bacon’s anguished Popes of the period – of which precious few survive. It is a privilege for us to present a work that combines the rarity of the Tangier Paintings with a lineage distinguished by Jan Krugier, Olga H. Knoepke, and the incredible Brooklyn Museum.”

Marking a critical historical moment in Bacon’s storied oeuvre, Pope illuminates the artist’s famously tortured soul as he further developed his most iconic subject matter – the Pope – in a crucial stage of his artistic development. The present work is distinguished by the Pope’s fully articulated face and impressive scale, which likens it to some of Bacon’s most celebrated works and iconic subject matter.

In the wake of World War II and the Holocaust, Bacon delved into the existential human condition, isolating his figures in anonymous, dark voids and trapping them in Alberto Giacometti-inspired cages. Pope bears all these hallmarks, combining the pivotal subject matter of the Pope and the coloring of the Men in Blue series with a superbly rendered face, which sees the artist pulls swaths of green and ivory across a taut jawline and hollowed eyes, one of which lands upon the viewer and affords an intimate glimpse into the sitter’s psychological state.