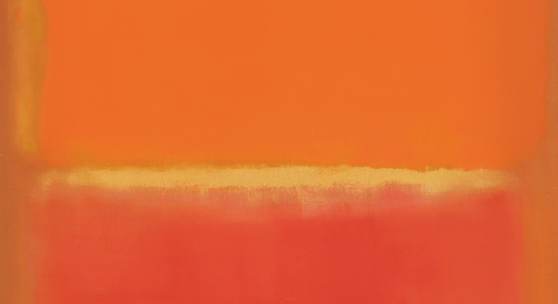 NEW YORK, 23 October 2019 – Sotheby’s is pleased to announce that we will offer Mark Rothko’s Blue Over Red from 1953 as a highlight of our Contemporary Art Evening Auction on 14 November 2019 in New York.

Blue Over Red marks the apex of the Rothko’s most critical period of development in the first half of the 1950s, during which the artist pioneered his signature style of abstraction. Testifying to the importance of this period in Rothko’s career, half of the 16 paintings the artist executed in 1953 reside in permanent museum collections, including the Whitney Museum of American Art in New York, the Walker Art Center in Minneapolis, the Museum of Contemporary Art in Los Angeles, the Phillips Collection in Washington, D.C., and the National Gallery of Art in Washington, D.C.

Blue Over Red was acquired directly from the artist in 1957 by legendary dealer and collector Harold Diamond. Diamond owned seven Rothko paintings during his life, three of which are now in prestigious museum collections: one in the Addison Gallery of American Art, one in the Hirshhorn Museum and Sculpture Garden, and one in the Ho-Am Art Museum in Seoul.

The painting subsequently spent decades with Baltimore collectors Israel and Selma Rosen, who offered the work at auction in 2005, when it sold for $5.6 million. It has remained in the same private collection since 2007.

Blue Over Red comes to auction this November with an estimate of $25/35 million. The painting will be on public view in Sotheby’s York Avenue galleries beginning 1 November.

David Galperin, Head of Sotheby’s Evening Auctions of Contemporary Art in New York, commented: “Some of the most moving paintings Rothko ever made date to the year of 1953. Just the year prior, Rothko moved his studio to 106 West 53rd Street, down the street from the Museum of Modern Art. Sunlight poured into his new high-ceilinged studio, resulting in these intensely vivid, brightly-colored paintings that appear to be illuminated from within. The exuberant palette and atmospheric depth of his Blue Over Red reflects the mastery of this transformative period in Rothko’s career. Rothko would spend hours in front of Matisse’s The Red Studio, which went on permanent display at MoMA in 1949, and it is in paintings like Blue Over Red where we can feel the impact of Matisse’s collapsing of space on Rothko’s explorations of color. Paintings from the much-lauded period of the early ‘50s are incredibly rare to auction, with this November marking the first time a painting executed in 1953 has been offered at auction since 2006. Following the great enthusiasm we saw for Rothko’s Untitled, 1960, which Sotheby’s offered this spring on behalf of SFMOMA, we are excited to present Blue Over Red as a highlight of our upcoming evening auction.”

Perhaps most significant to Rothko’s embrace of pure color as vehicle to an emotional experience was Matisse, whose own practice had so radically redefined the relationship between form and color only decades prior. Although perhaps a coincidence, Rothko’s descriptive titling of the present work, Blue Over Red, further underscores the artist’s commitment to color and nods to Matisse’s masterpieces The Blue Window and The Red Studio, both of which would have been easily visible to the artist – especially following his move to a new studio on 53rd Street in 1952, just steps from the Museum of Modern Art where they reside.

By the time he painted Blue Over Red, Rothko had built an inimitable practice that reflected styles and sources as disparate as the realist trend in American art and the Surrealist masters such as Joan Miró and Salvador Dalí in Europe. Rothko first committed himself entirely to abstraction in 1947 when he began his series of Multiform paintings, a natural bridge between the biomorphic and organic forms of his Surrealist-inspired works and the flooded fields of color that would dominate his iconic gateways to the sublime. Following that series, Rothko reached a crucial turning point in 1949-50 when he established an abstract archetype. Referred to by Rothko catalogue raisonné editor David Anfam as his ‘anni mirabilis’, Rothko developed his mature and signature style throughout the first half of the 1950s.

Although Rothko’s abstraction was entirely unparalleled, his quest for the sublime through a conflation of light and color was rooted in historical precedent – from the Romantic landscape painters Mallord William Turner and Caspar David Friedrich to the Luminists Pierre Bonnard and Henri Matisse, artists seeking a transcendent artistic experience would inform the new painting Rothko initiated in mid-century New York.

Executed in a richly saturated palette of orange, red, and yellow, dramatically offset by one luminous blue band, Blue Over Red exemplifies the signature radiant splendor of Rothko’s works. Featuring sumptuous color and blazing light, the present work represents the summation of the artist’s deeply philosophical practice. Rothko conjures an emotional tension through his strategic use of color, the uplifting and warming glow evoked by orange and red contrasted sharply with the blue band. Although the painting comprises overwhelmingly blazing hues, the blue asserts itself intensely, existing ‘over’ the fields of red and orange.


MARK ROTHKO’S BLUE OVER RED TO HIGHLIGHT SOTHEBY’S CONTEMPORARY ART EVENING AUCTION THIS NOVEMBER IN NEW YORK The First Work from Rothko’s Critical Year of 1953 To Appear at Auction in over a Decade Acquired Directly from the Artist by Harold Diamond, Legendary Dealer & Collector * Blue Over Red is Estimated to Sell for $25/35 Million *
Sotheby’s Auktionshaus