Landmark watch auction series continues at Sotheby's with a tribute to A. Lange & Söhne 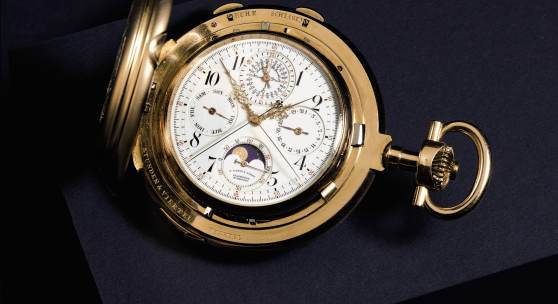 Second Auction of Watches from the Landmark Collection MASTERWORKS OF TIME

To be Dedicated to The Legacy of A. Lange & Söhne One of the Greatest Collections of Timepieces by the Glashütte Manufacturer charting the history of the pioneering family firm which changed the face of watchmaking in Germany

Geneva, 15 October 2019 – In the wake of the swathe of records set in London this summer by the first of the offerings from the legendary “Masterworks of Time” Collection, Sotheby’s will now present a further selection of timepieces from this extraordinary collection in Geneva on 11 November 2019.

While the scope of Masterworks of Time is vast, chronicling the history of watchmaking from Renaissance to the 20th century, this autumn’s offering will focus on the legacy of A. Lange & Söhne, featuring one of the most impressive collections of timepieces by the German manufacture ever to appear at auction. Together, over 30 pieces chart the history of the pioneering family firm which changed the face of watchmaking in Germany and beyond. While the core of the sale will consist of watches made by A. Lange & Söhne themselves, these will be complemented by fine examples of Swiss, French and English pocket watches from the 16th to the 20th century. For instance, alongside two exceptionally rare pocket watches by Lange, the auction will also include a rare pocket watch by Adolf Schneider – who worked alongside Ferdinand Adolph Lange in Glashütte – and will be complemented by an exceptionally rare double-singing bird cage with timepiece by Frères Rochat dating from around 1815.

Daryn Schnipper, Chairman, International Watch Division: “Lange and his sons built the German watchmaking industry entirely from the ground up: it was an early example of a start-up. The endeavour brought prosperity to Glashhütte and placed it on the map as a center for precision watchmaking. This is a family with horology in their DNA: following considerable adversity during the 20th century, in 1990 Walter Lange revived his great-grandfather’s vision. The Masterworks of Time collection represents the best of the best, throughout watchmaking history, and so it is only natural that the exceptional craftsmanship and precision of A. Lange & Söhne should be represented.”