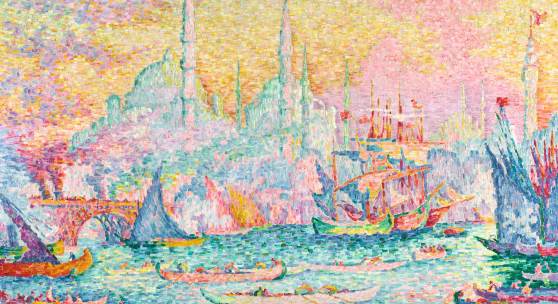 NEW YORK, 31 October 2019 – Sotheby’s is pleased to unveil highlights from our Evening Sale of Impressionist & Modern Art on 12 November in New York. Distinguished by a diverse range of works on offer from private collections and with exceptional provenance exhibited throughout, the 53 lots on offer will go on public view in Sotheby’s York Avenue galleries beginning Friday, 1 November.

In addition, Sotheby’s will host a press preview at our York Avenue headquarters to coincide with the exhibition opening on 1 November. Camera crews are welcome as of 8:00am, with a specialist walkthrough beginning at 9:00am.

PAUL SIGNAC’S RESPLENDENT PAINTING OF ISTANBUL’S ‘GOLDEN HORN’
Likely the greatest post-1900 work by Paul Signac ever to come on the market, La Corne d'Or (Constantinople) from 1907 is the largest and most striking canvas that the artist painted during his first visit to Istanbul in the spring of that year (estimate $14/18 million). Depicting a lush, textural surface comprised of rectangular brushstrokes, the present work captures the grandeur, history and unique quality of light and color that filled the ancient city.

This historic meeting place of East and West had captivated Signac’s imagination for some time before he finally discovered it for himself while sailing between Naples and Greece. The location inspired twelve paintings, all of which take as their subject the historically significant Golden Horn — a flooded estuary of the Bosphorus near the port of Istanbul. When he painted the current work in 1907, Signac was further developing his artistic style beyond the strict tenets of Divisionism that he had adopted from Georges Seurat in the 1880s. He liberated his color palette, daring to blend the pure pigments seen in earlier works, and broadened his approach while retaining the main characteristics of the style through his pointed application of brushstrokes. This mature style was characterized by a subtle exploration of the nuances of light combined with a chromatic richness that is a key quality of this dazzling canvas.

GUSTAVE CAILLEBOTTE’S FINAL PORTRAIT OF HIS MOST FREQUENT SUBJECT
Gustave Caillebotte’s Richard Gallo et son chien Dick, au Petit Gennevilliers leads an ensemble of ten works entitled Property of a Gentleman. Gifted by the artist to Gallo, the present work from 1884 is Caillebotte’s final and most impressive portrait of his dear friend and most frequently painted figural subject, Richard Gallo (estimate $14/18 million).

Appearing in Caillebotte’s work in four large-scale paintings from as early as 1878, Gallo was the Egyptian-born son of a French banker who settled in Paris in 1869 and befriended the artist at school. Gallo would go on to become the editor of the newspaper Le Constitutionnel and maintain his friendship with Caillebotte and his brother Martial for years to follow. While little more is known about Gallo, the frequency with which he is portrayed in Caillebotte’s oeuvre stands as a testament to the pair’s lasting friendship. Richard Gallo et son chien Dick, au Petit Gennevilliers remained in Gallo’s collection until his death, at which time his nephew Maurice Rolland inherited the work. This resplendent and touching portrayal was on extended loan to the National Gallery in London in the early 1990s, as well as on loan to The Metropolitan Museum of Art in New York from 2000-02, and has appeared in numerous international exhibitions since its creation.

A SUMPTUOUS EXAMPLE FROM CLAUDE MONET’S FAMED LONDON PICTURES
The November Evening Sale is led by Claude Monet’s Charing Cross Bridge from 1903 (estimate $20/30 million). Painted during a series of three trips to London from 1899-1901, the canvas is a luminous example from the French painter’s seminal London series and one of the finest pictures from this prolific group ever to appear to auction.

Throughout these works, Monet captured the juxtaposition of the beauty of natural phenomena, such as fog rolling over the Thames, with the industrial development booming in London at the time, epitomized by smoke stacks and steam powered railways. Composed from the vantage point of his room at the Savoy Hotel, Monet found the view particularly advantageous in observing the London landscape and onset of the city’s fog. The mutability of the fog, he discovered, proved to be an apt vehicle for capturing scenes of the same subject matter repeatedly, but with differences in color, touch and lighting.

Having remained in the same family for more than 40 years, the painting leads a group of 16 works from the Klepetar-Fallek Colleciton, to be offered across Sotheby’s Evening and Day Sales of Impressionist & Modern Art this November. The collection was assembled primarily in the 1970s and 1980s by Andrea Klepetar-Fallek and her then-husband Fred Fallek. Ms. Klepetar-Fallek’s extraordinary life story is one of incomparable resilience, independence and optimism – including an escape from Nazi-occupied Vienna, liberation from an Italian concentration camp, and flight from Peronist Argentina.