THE COLLECTION OF MARC JACOBS 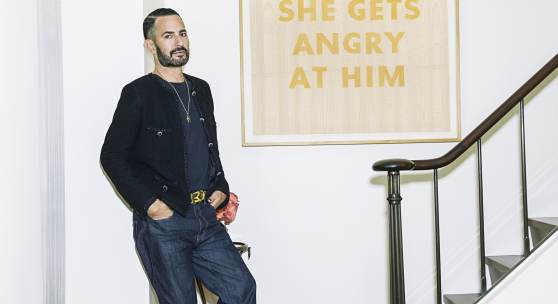 NEW YORK, 1 November 2019 – Sotheby’s is pleased to announce that we will offer fine art and design from the personal collection of renowned fashion designer Marc Jacobs across a series of sales beginning this fall in New York.

The vast majority of the 150+ works on offer were acquired by Jacobs for his four-story townhouse in Manhattan’s West Village, a wonderful showcase for his collection of art and design that he shares with his husband Char Defrancesco. Earlier this year, Jacobs and Defrancesco purchased a Frank Lloyd Wright-designed home in Rye, New York and are now selling both the townhouse and much of the collection held therein.

Initially intimidated by the art world, Marc Jacobs first began collecting fine art after visiting a Mike Kelley exhibition at the Whitney Museum of American Art, which prompted him to seek the advice of his close friend, artist John Reinhold, regarding how to purchase art. He quickly developed a discerning eye and fastidious taste for exceptional quality, reflected in his esteemed collection of fine art. Works by Ed Ruscha, John Currin, Elizabeth Peyton, Urs Fischer, Richard Prince and Andy Warhol live beautifully alongside modern masters such as Francis Picabia and Alberto Giacometti. An early patron of both Currin and Peyton, Jacobs formed closed personal relationships with these artists in particular, which fueled a greater passion for their art and led him to collect their work in depth.

Fine Art from the Collection of Marc Jacobs will be offered across Sotheby’s Contemporary and Impressionist & Modern Art auctions this November in New York, with public exhibitions opening 1 November.

In addition to fine art, Jacobs has assembled some of the most exceptional pieces of European design from the past century, by masters such as François-Xavier Lalanne, Alberto and Diego Giacometti, Jean-Michel Frank, Eugène Printz, Jean Dunand, Paul Dupré-Lafon and Maurice Marinot. Representing the very best in artistry and design, each work that he has collected over the past two decades is emblematic of his impeccable taste as both a fashion designer and art connoisseur. All hand-selected by Jacobs, the collection offers fresh-to-market pieces that he acquired from notable galleries, auctions and directly from artists’ studios.

Design from the Collection will be presented in the dedicated auction Marc Jacobs: A Life of Design on 12 December 2019 in New York. In addition, Sotheby’s will hold a dedicated online-only auction of design works from Jacobs’s Paris apartment, open for bidding on sothebys.com from 4 – 13 December. Public exhibitions for both offerings will open 7 December.

Regarding the sale of his collection, Marc Jacobs commented: “Well, I’m not Marie Kondo. I didn’t decide everything must go. I thought about my role as an art collector. I love what Steve Martin says, that these things are not mine – I am a custodian for them. There’s also just the logistics – when you move into a Frank Lloyd Wright house, there isn’t a lot of wall space and you can’t hang a lot of paintings. As much as I will have a difficult time parting with them, I just felt it’s time to give myself this window to start again.”