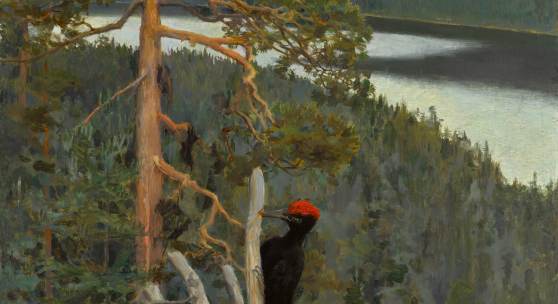 NEW YORK, 4 November 2019 – Sotheby’s is pleased to announce that we will present Finnish artist Akseli Gallen-Kallela’s Palokärki (Great Black Woodpecker or Wilderness) as a highlight of our Impressionist & Modern Art Evening Sale on 12 November 2019 in New York, where it will make its auction debut after residing in the same private collection for more than 45 years. As one of the finest examples of Nordic painting, the transfixing, serene landscape painting is estimated to sell for $1.8/2.5 million, and it is poised to set a new auction record for the artist. Gallen-Kallela’s current auction record was established by Sotheby’s London in July 2019 when View Over a Lake at Sunset sold for $886,100, 474% above the high estimate.

Simon Shaw, Vice Chairman of Sotheby’s Global Fine Art Division, remarked: “We are delighted to present this sensational work by Akseli Gallen-Kallela this November – the first time that a work by the Finnish artist will be offered in our New York Evening Sale of Impressionist & Modern Art. Since Sotheby’s London made the groundbreaking sale of Gallen-Kallela’s Keitele in 1999 to the National Gallery in London, we have witnessed steady and continued growth for the artist among collectors. Building on the momentum of the record-setting sale of View Over a Lake at Sunset in July, and with Palokärki poised to set yet another record for the artist, Sotheby’s is further cementing its place as the preeminent destination for Nordic art, having also recently set records for Vilhelm Hammershøi, Helene Schjerfbeck and Harald Sohlberg, among others.”

Palokärki is currently on view at Sotheby’s New York galleries on York Avenue through 12 November, alongside our marquee auctions of Impressionist & Modern and Contemporary Art.

Akseli Gallen-Kallela
In the 1890s, when his cosmopolitan contemporaries, such as Émile Bernard and Paul Gauguin, sought the exotic in Pont-Aven and Tahiti, Gallen-Kallela traveled to the Finnish wilderness. Finding even the modern bustle of Helsinki overwhelming, he struck out into the wilds of North Karelia, near the Arctic Circle, with his wife and daughter, in search of empty acreage to build a new home and the passionate life force of nature, his new artistic inspiration.

For Gallen-Kallela, nature increasingly became a source of symbolism and metaphor for a growing Finnish patriotic movement. Known at the time as the Grand Duchy of Finland under the control of Russian authorities, Gallen-Kallela found a passionate argument for the sovereignty of Finnish identity in the wilderness, and expressed these political and cultural concepts in his revered landscapes. He stated: “He who lives and works much out in nature, can almost catch himself speaking to the trees of the wood…our folklore witnesses to the fact that a deep experience of nature is a characteristic of the Finns. It can be said, perhaps, that we tend to personify nature, which expresses itself in our art and literature.”

Palokärki (Great Black Woodpecker or Wilderness)
A masterpiece of Finnish art, the bold, enigmatic and sublime landscape, highlighted by the stark contrast of the woodpecker’s deep black plumage and red crown of feathers, fuses two of the greatest art movements of the late 19th century: French Realism and the burgeoning Nordic Landscape movement. Painted between 1892 and 1894, the painting is the first by Gallen-Kallela to combine his prior adherence to Realism and his clear but occasionally dispassionate representation of nature, with a growing perception of landscape as an evocation of emotional meaning. Partly inspired by National Romanticism, a strain of Symbolism that took hold in the Nordic countries in the 1890s, Gallen-Kallela painted the woodpecker to further mark this shift in attitude, as he painted two additional works in the same time period that articulated this change of conception of landscape as a metaphor for mythology and folklore with distinctly political subtext.

In summer of 1892, Gallen-Kallela travelled to Lake Paanajärvi, then in northeastern Finland and now just beyond the Russian border. Along the banks of the fjord-like lake, Gallen-Kallela began painting Palokärki, completing this oil in his studio in either Helsinki or Sääksmäki by 1894.

Describing the inspiration for the painting and the symbolism of the woodpecker, Gallen-Kallela stated: “The woodpecker has always been my friend. Always when I listen to its fresh, piercing voice I get the feeling that I am so far from all the human habitation that there no longer is any contact—even if this occurs just around the corner from my home…The red spot is the individual’s cry for life in the quietude of the hinterlands.”

For Gallen-Kallela, the woodpecker was a symbol of Finnish patriotism, embodying his pride in the natural world he called home and a defiant resistance to “Russification,” a program of systematic attempts by Russian authorities to culturally assimilate the Finns prior to winning their independence in 1917.

Over 100 years later, the painting continues to reverberate with Gallen-Kallela’s call to the individual spirit and freedom embodied by the solitary woodpecker among the vast Finnish wilderness. Beyond the surface of its dispassionate representation of nature, the painting’s undertones of hard-fought political autonomy and national independence make it a subversive masterwork of Finnish art and modern landscape painting.