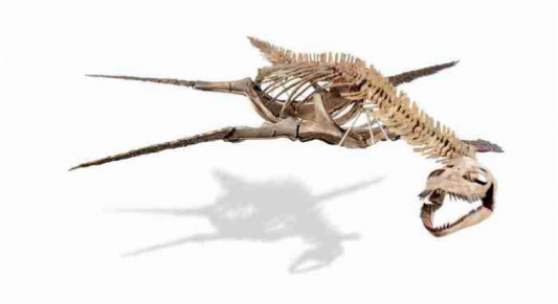 The 313 cm long and 240 cm wide dinosaur skeleton was found during construction of a building near Peterborough several decades ago. The finder noticed what appeared to be bone protruding from the side of a trench. He recovered what material he could before the trench was back filled. The skeleton which is 60% complete has subsequently been expertly and skilfully prepared and impressively mounted for display. The Oxford clay is now infrequently exposed and is usually excavated mechanically so very few remains are recovered making this specimen particularly rare. Fewer than eight, 3-dimensional Cryptoclidus plesiosaur skeletons are known to have been mounted for display and it is believed this is one of only 3 known British ones.
v Other fossils also did well including a rare fossilised Mesohippus skeleton, which sold for £25,000 (£20,000 h.p.) against an estimate of £8,000-12,000 and a rare fossilised Sabre tooth cat sold for £25,000 (estimate £12,000-18,000, £20,000 h.p.) as well. A large and rare Mosasaurus skull from Morocco sold for £18,750 (£15,000 h.p.).

A magnificently appointed and highly ornate rosewood case with an assortment of Indian birds by the celebrated 19th century taxidermist Henry Burton of Wardour Street, London saw fierce bidding on the phones. A case on this scale and of this importance in such fine condition is a very rare and desirable survival from the Victorian era and was estimated at £4,000 – 6,000, but the hammer finally came down at £8,000 (£10,000 with buyer's premium) and went to a private collector.