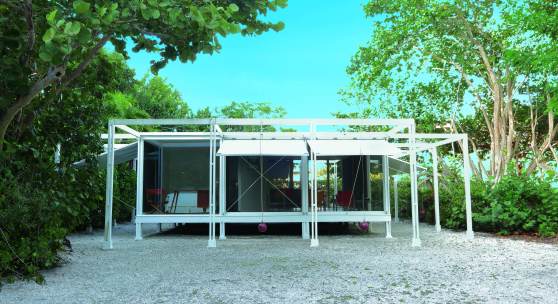 Sotheby’s to Auction An Icon of Modern American Architecture: THE WALKER GUEST HOUSE

One of the Most Important Buildings of Paul Rudolph’s Career

Commissioned directly from the Celebrated Architect By Dr. Walter W. Walker in 1952 For His Family’s Land on Sanibel Island, Where It Has Remained Since

NEW YORK, 22 November 2019 – Sotheby’s is honored to announce that we will offer an icon of modern architecture, the Walker Guest House by Paul Rudolph, as a highlight of our bi-annual New York auction of Important Design on 12 December 2019.

A carefully planned structure designed as a beach cottage overlooking the Gulf of Mexico, the Walker Guest House was commissioned by Dr. Walter Willard Walker in 1952 for construction on his family’s land on Florida’s Sanibel Island. The commission represented the first solo project for architect Paul Rudolph, following his split from the firm of architect Ralph Twitchell.

The plan of the Walker Guest House is a groundbreaking study in the relationship between interior and exterior space, an integral tenet of Rudolph’s body of work. Measuring 576-square-feet and resting on a 24-by-24-foot platform, the structure employs wood, steel, and glass to create thoughtfully proportioned lines, planes, and volume that shape the inhabitant’s experience of both the indoors and outdoors.

The historic structure is estimated to sell for $700,000/1 million in Sotheby’s Important Design sale. Underscoring the adaptability of this one-of-a-kind object, the home is completely movable, allowing for its next owner to relocate the house to any destination of their choosing. All of the home’s furnishings are included in the auction lot. This sale does not include the land or primary residence on Sanibel Island.

Jodi Pollack, Sotheby’s Co-Worldwide Head of 20th Century Design, said: “It is a great privilege to present the Walker Guest House in our Important Design sale this December, which represents one of the most important surviving examples of modern American architecture, as well as one of the greatest creations of Paul Rudolph’s early career. This remarkable structure is entirely unique – from its signature red cannonball pulley system, to the delicate balance of openness and privacy. Upon visiting the house for the first time, I was immediately struck by the ethereal sense of light and airiness that created a seamless connection with the outside landscape, as well as the overwhelming sense of efficiency. It was as if the house was a “machine for living,” entirely adaptable for all occasions. Though it was built nearly 70 years ago, the Walker Guest House has continued to impart this sensory experience upon anyone who visits it, which is a testament to both Rudolph’s legacy and that of the Walker family, who have remained the house’s loyal stewards. We are honored to play a small role in the preservation of this legacy by offering this innovative structure to design and architecture patrons worldwide in our sale this December.”

“If the Walker Guest House could not be preserved in situ,” explains Pulitzer Prize-winning architectural critic Paul Goldberger, “the next best thing, [the Walker family] decided, would be to sell it to someone who would give it a new life somewhere else. It will almost surely leave Sanibel Island, but the trade-off will be knowing that one of the most important designs by one of the 20th century’s most important architects – one that, by its nature, is not specific to its site, and could be set down almost anywhere – will be preserved; a Paul Rudolph mid-century masterwork available for generations to come.”

Rudolph drew on Caribbean architecture to create the house’s most iconic feature: its adjustable, multi-functional exterior wood panels. Operated through the ingenious use of 77-pound, red-painted cannonball weights sourced locally from Sanibel Island, the panels serve as shutters when closed and form shady canopies when opened, imbuing the house with a uniquely versatile and adaptable quality. Today, members of the Walker family warmly refer to the house as the “Cannonball.” The effect of the panels fulfilled an important requirement for Rudolph who believed people need both “caves” and “goldfish bowls” to live in.

The language that Rudolph used to describe his creation is reflected in the lush Florida flora and fauna. “It crouches like a spider in the sand” Rudolph stated, having once called his earliest drawings of the house his “sketches in the sand.” Unlike many other icons of the International Style, the Walker Guest House gave the family the ability for both privacy and openness. Critically acclaimed upon completion, the Walker Guest House was recognized by the readers of Architecture Record in 1957 as one of the most important houses of the century, alongside Mies van der Rohe’s Farnsworth House and Philip Johnson’s Glass House. Today the house stands as a beacon of American mid-century modernist architecture, as well as one of the most significant works within Paul Rudolph’s decades-long career. The design of the house represents a perfect melding of functionalism and architecture, and elegantly demonstrates Rudolph’s central principle of adaptability.

Rudolph went on to become a key figure in the Sarasota Modern regional style of architecture as it gained international attention for designing modernist homes. In 1958, Rudolph was appointed Dean of the Yale School of Architecture and went on to design some of the most important buildings of the 1960s and 70s, including the Yale Art and Architecture Building and the townhouse of famed fashion designer, Halston, in New York City.