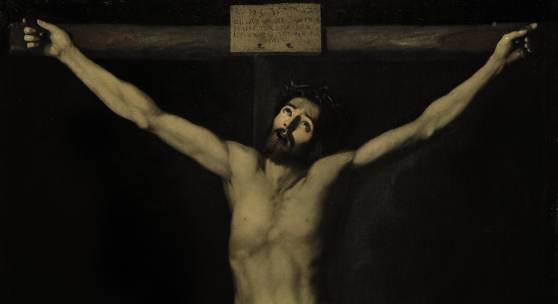 Monumental work by Spanish Baroque Master to lead Sotheby’s December Old Masters sales
LONDON, NOVEMBER 2019 – As one of the most important painters of religious subjects of the seventeenth century, Francisco de Zurbarán's iconic depictions of Christ on the Cross are amongst the most striking and profoundly moving images to be found in Spanish Baroque art.

On 4 December, Sotheby’s will offer a powerful, life-size depiction of the crucified Christ by the Spanish Master, offered for sale for the first time in over 25 years. The monumental work portrays Christ nailed to a rough-hewn cross, still alive and gazing heavenwards, dramatically lit with only the barest hints of a distant landscape as a setting. A friend and contemporary of the famous Baroque Spanish painter, Diego de Velázquez, Zurbarán was known as the ‘Spanish Caravaggio’ for his masterful and dramatic use of light and dark in his paintings. This distinctive style, alongside the deliberately austere religious realism seen in his work was intended to shock the senses and stir the soul of the faithful, according perfectly with the needs of the Counter-Reformation in seventeenth century Spain.

The theme of the Crucified Christ was of central importance in Zurbarán’s œuvre. The artist executed some thirty works on this subject, with his earliest painted for the Sevillian monastery of San Pablo el Real in 1627, which today is in the Art Institute of Chicago. Painted around 1635, this work is one of only three autograph versions of this specific iconographic type, and the only one to be signed, indicating that it can likely be considered the prime original.

Andrew Fletcher, Sotheby’s Head of Old Master Paintings, said: ‘The moving simplicity and startling visual language expressed by the artist in this monumental work clearly shows why Zurbarán was unsurpassed as a painter of the revived Catholic spirituality of his times. His profound understanding of anatomy and focus on detail and texture in the luminous flesh and the cleanly modelled folds of the loincloth make for an illusion of unprecedented reality in this remarkable painting.’