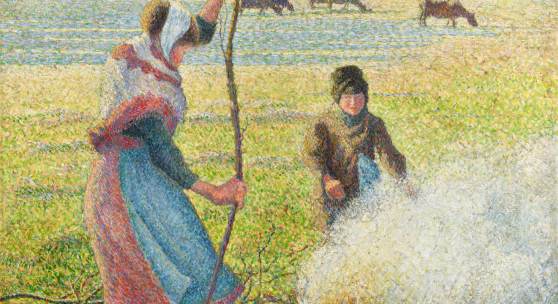 “These exceptional works are truly testament to two great artists’ persistent and ultimately triumphant attempts to break new boundaries in art – with every inch on their canvases a highly-finished kaleidoscope of perfectly chosen colour. Their history also paints a compelling picture of the realities of restitution, and we look forward to being part of the next step in their journey.”
Thomas Boyd-Bowman, Head of Sotheby’s Impressionist & Modern Art Evening Sales in London

“Sotheby’s is honoured to have been chosen by Gaston Lévy’s heirs to offer these important paintings and to tell the story of the collector and his heritage.” Lucian Simmons, Sotheby’s Worldwide Head of Restitution

Sotheby’s Impressionist & Modern Art Evening Sale on 4 February will include three works recently restituted to the heirs of Gaston Lévy, one of the most notable patrons and art collectors living in Paris in the 1920s and 1930s. A highly successful businessman and property developer, Lévy and his family lived in a magnificent apartment on the Avenue de Friedland, which he filled with books, paintings and works of art, many of which he bought from the great dealers of his day, including Bernheim-Jeune, Paul Durand-Ruel and Ambroise Vollard.

Lévy’s art collection was dispersed under the Nazi occupation, and two of the works to be offered in February were lost to the ‘Einsatztab Reichsleiter Rosenberg’ (an organisation dedicated to receiving looted cultural property) in October 1940. After the war, the works were repatriated to the French state, and have recently been restituted by the French Government to Lévy’s heirs from the Musée d’Orsay in Paris.

The third of the works to be offered – Signac’s Quai de Clichy. Temps gris – had been stored in the Lévy’s country home, the Château des Bouffards, but later found its way into the collection of the dealer Hildebrand Gurlitt, whose illicit hoard was discovered by the authorities in 2012.

The jewel of the group is a Pointillist masterpiece by Camille Pissarro. Painted with enormous thought and dedication over a period of some six months, Gelée blanche, jeune paysanne faisant du feu depicts a young woman and child building a fire on a cold winter’s morning, where every brushstroke works to bring to life the movement of smoke in the wind.

Through his patronage of the Pointillists, Lévy also formed a lifelong friendship with Signac, holidaying with the artist as well as sponsoring his project to paint 107 ports in France – securing his first pick from every batch of watercolours. Over the arc of his collecting career, Lévy owned forty-four oils by the artist. The auction will offer two paintings from different points in Signac’s oeuvre – transporting the viewer from a brisk morning in a Parisian port to the exotic delights of Istanbul’s waterside.