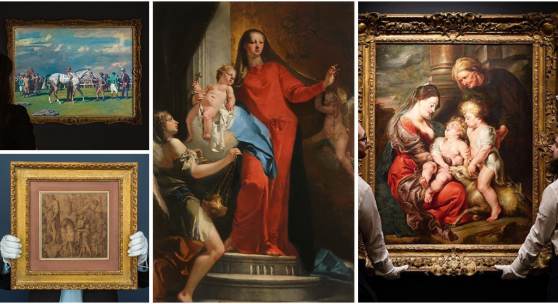 Giovanni Battista Tiepolo’s 8-Foot Tall Altarpiece of the
Madonna of the Rosary with Angels Sells for a Record $17.3 Million,
Nearly 3X the Artist’s Previous Auction Record

Andrea Mantegna’s The Triumph of Alexandria Sells for $11.7 Million
New Auction Record for a Drawing by the Renaissance Artist
&
*The 5th Most Expensive Old Master Drawing Ever Sold at Auction*

NEW YORK, 31 January 2020 – Sotheby’s annual Masters Week auctions concluded today in New York, with 338 paintings, drawings and sculptures selling for an overall total of $94.3 million, firmly within the series’ pre-sale estimate ($81.2 – 103.6 million), and with nearly 50% of sold lots achieving prices above their estimate.

Below is an overview of the sales and highlights that drove this week’s results:
MASTER PAINTINGS EVENING SALE
Auction Total: $61.1 Million

Christopher Apostle, Head of Sotheby’s Old Master Paintings Department in New York, commented: “Our wonderful results were an indicator of the strength of the Master Paintings market across the full range of this field, from early Italian and Northern pictures to Baroque paintings and 17th century Dutch and Flemish pictures. Works of the finest quality achieved significant prices, most notably the record-setting sale of the monumental Madonna by Giovanni Battista Tiepolo and two extraordinary works by Sir Peter Paul Rubens that had not been on the market in decades. Throughout the sale, we saw spirited bidding in the room, on the phone, and online, with many works far exceeding their high estimates after back-and-forth bidding battles. There was a broad base of buyers, including private collectors and dealers from the United States, Europe, and Asia.”

The Evening Sale was led by Giovanni Battista Tiepolo’s monumental altarpiece of The Madonna of the Rosary with Angels, which sold for $17.3 million, establishing a new record for the artist at auction, and more than doubling the artist’s previous auction record. Painted in 1735, the altarpiece is a mature early work, dating from a period that is considered Tiepolo’s best and one that brought him recognition as the greatest painter of 18th-century Europe. Measuring over 8 feet tall, the work is distinguished as the largest and most valuable offering of the Venetian artist's work to come to market. Major works of such astounding quality by Tiepolo are rare on the international market, for much of his work was carried out in frescoes and altarpieces that remain in situ or are located in museums.

The sale's offering of Flemish masterworks was led by Sir Peter Paul Rubens’s The Virgin and Christ Child, With Saints Elizabeth and John the Baptist, which sold for $7.1 million (estimate $6/8 million). Recently rediscovered through research led by Sotheby’s Otto Naumann, the painting appeared at auction for the first time in over 70 years, having remained in private collections. Previously unrecorded, the work represents a critical addition to Rubens scholarship and will appear in the forthcoming new volume of the Corpus Rubenianum catalogue raisonné.

Gregory Rubinstein, Head of Sotheby’s Old Master Drawings Department, commented: “We are extremely pleased with the results from our sale, which set a record for an Old Master Drawings sale at Sotheby’s worldwide—the second year in a row we’ve established a new benchmark during Masters Week in New York. As the market continues to grow and trend upward, today we saw great demand for works of the highest quality and rarity. Led by Andrea Mantegna’s only known preparatory study for his Triumphs series, along with the first drawing by 15th century master Bernardino Pintoricchio ever to appear at auction, collectors responded enthusiastically to these exceedingly rare masterworks. To showcase works and artists that have been obscured for centuries is a remarkable thrill and privilege, and we look forward to offering exquisite treasures in London this July.”