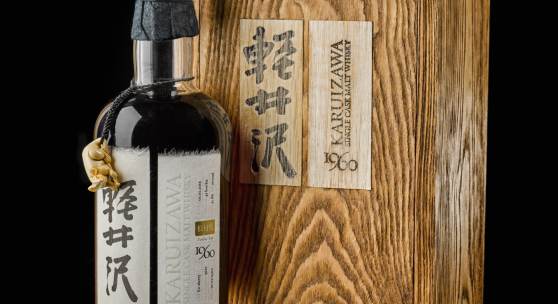 *Featuring the oldest Macallan and Karuizawa ever bottled*

Finest & Rarest Spirits
Highlighted by:
Karuizawa 52 Year Old Cask #5627 Zodiac Rat 1960
*Coinciding with the Year of the Rat in the Chinese Zodiac Calendar*

Finest & Rarest Wines
Highlighted by:
Two Cases of the Legendary Cheval Blanc 1947 from the Ortiz Collection
An Exceptional Cellar of French Classics

Sotheby’s Finest & Rarest Spirits features the oldest Macallan and Karuizawa ever bottled alongside landmarks of luxury in the world of whisky.

Jonny Fowle, Sotheby’s Spirits Specialist, commented: “We are delighted to present such a strong selection of bottles consigned directly from producers as well as from private collections to begin our 2020 sales in London. Among the most exciting bottles in this sale are the Gordon & MacPhail Private Decanters, all of which are numbered 1 of their respective outturn. This is the first time that any number 1 decanter from G&M has been offered for sale rather than kept within the Urquhart Family archives. Offering these alongside such iconic bottles as Karuizawa 52 Year old from Cask #5627 and so many Macallan in Lalique decanters showcases the strength of current demand for the very best in the world of whisky.”

Finest & Rarest Spirits features the highly sought after Karuizawa 52 Year Old Cask #5627 Zodiac Rat 1960, the most coveted bottle from this closed Japanese distillery that is fortuitously offered this year, the Year of the Rat. In 2018, a bottle of this Japanese single malt broke the record for the most expensive bottle of Japanese whisky ever sold at auction, superseded several months later by a rare bottle of Yamazaki 50 Year Old 1st Edition.

Among the most notable bottlings in this auction is an impeccable array of old Gordon & MacPhail releases from previous decades with vintages stretching back to the 1930s, which culminate in a collection of four highly aged and very limited Crystal Decanters from the G&M Private Collection. These decanters have been consigned to Sotheby’s directly from the Urquhart family and each is number 1 out its respective outturn. This is the first time that any decanter numbered “#1” has been released for sale from Gordon & MacPhail rather than being kept in the Urquhart family’s own collection.

A truly impeccable lineup of aged Macallan Whiskies ranges from an independently bottled 48 Year Old through an unbroken vertical of The Macallan in Lalique Six Pillars Collection – six crystal decanters ranging from 50 to 65 years old, rarely seen in an unbroken vertical – to the inimitable 72 Year Old Genesis Decanter, the oldest whisky to be released from this exemplary distillery.

Finest & Rarest Wines
725 Lots with a Pre-Sale Estimate of £1.8-2.3 Million
The Ortiz Collection
Serena Sutcliffe, MW, Honorary Chairman, Sotheby’s Wine, commented: “It always gives us special pleasure when we are asked to evaluate a family collection of wine and then entrusted with bringing a part of it to auction. This is a collection that combines truly gasp-making, historic wines with other bottles (or cases) that we can all enjoy on a regular basis. The choice veers between First Growth 1947s to Super Seconds from the Nineties and the best of Médocain properties from this century at very accessible prices, with really exciting stops along the way, such as full cases of Margaux 1982.”

Wines from the amazing cellar of George Ortiz (1927-2013), one of the world's foremost collectors of antiquities, are headlined by two cases of the legendary Cheval Blanc 1947, together with majestic parcels of Margaux and Latour from the same vintage, further red Bordeaux spanning five decades, and rounded off with Yquem from the 1920s. The 1947s were all bought en primeur by Ortiz’s father, Jorge Ortiz-Linares and have been moved only once since original acquisition, thereafter left undisturbed under impeccable conditions in the vaulted stone cellar on the family estate in Switzerland. The 1947 vintage is considered the greatest Cheval Blanc of the 20th century, being both very powerful and beautifully balanced. In 2015, Oliver Ortiz, the son of the late George Ortiz, witnessed the recorking process at the Château. Each bottle was tasted, topped up, relabelled, and closed with new corks and capsules, under the direction of Pierre-Olivier Clouet, Cheval Blanc's Technical Director, and packed in new original wooden cases.

An Exceptional Cellar of French Classics features Bordeaux from the standout vintages of the 1950s through 2000 including myriad châteaux in the fabled 1982 vintage. The collection includes an abundance of large formats, notably Latour 1955, Lafite 1959 and Haut Brion 1982, all in double magnum, whilst the Right Bank selection boasts two superlative duos: Petrus and Lafleur 1982 and La Conseillante and Vieux Château Certan 1989. Burgundy shines with an extraordinarily rare, complete 1985 Domaine de la Romanée-Conti Assortment case. The collection has been housed in an immaculately kept, purpose-built cellar, reflected in the outstanding condition of the bottles on offer.