Modern & Contemporary Middle Eastern Art in the spotlight at Sotheby's 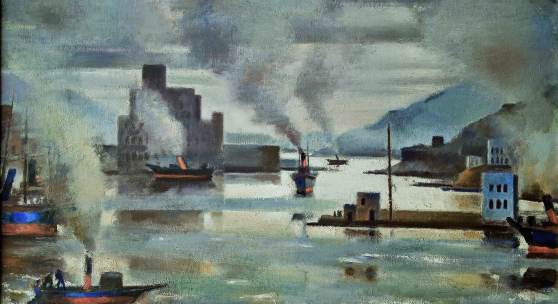 Last exhibited in 1960 in Mahmoud Said’s native city of Alexandria, Piraeus at dawn (1949) is a rare example of the pioneering Egyptian master turning his hand to an industrial scene. The painting depicts a moment suspended in time, before the day starts, at Greece’s largest and most urbanised port, the canvas populated with ships scattered on the silver sea. An otherworldly stillness emanates from the work, which evokes Georges Seurat’s neo-Impressionist views of fishing villages as well as L.S. Lowry’s panoramic cityscapes.

The auction will also present an unprecedented offering of seven works by sought-after Iraqi artist Mahmoud Sabri in a single sale – including the first known work by the artist. The pieces come from the collection of Sabri’s close lifelong friends, brothers Hafez and Hamdi Touqmatchi, who published the first and only survey of the artist’s career in 2013. Having met Sabri at school in Baghdad, their collection chronicles four decades of his oeuvre, throughout which he expressed a socialist message of universal equality, whilst paying homage to Assyrian and Babylonian art and architecture.

Over seventy lots, the auction and exhibition will shine a light on some of the greatest names in modern and contemporary art from across the region, including Etel Adnan, Monir Farmanfarmaian, Mohamed Melehi, Fahrelnissa Zeid, Ramses Younan and Bahman Mohasses.