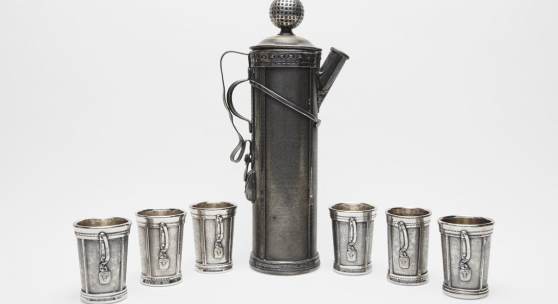 Coinciding with the 100th Anniversary of the Start of Prohibition, As Well as the Current Trend in At-Home Bars

ONLINE AUCTION OPEN FOR BIDDING 7–21 MAY
NEW YORK, 29 April 2020 – Sotheby’s is pleased to present 100 Years – Prohibition in America, an online auction celebrating the beauty, ingenuity and design of barware and fine silver that was inspired both practically and artistically by the era of Prohibition in the United States. Bidding will be open on Sothebys.com from 7–21 May 2020.

Coinciding with the 100th anniversary year of the start of Prohibition in 1920, Sotheby’s has partnered with Alan Bedwell, owner of vintage accessories gallery Foundwell, to curate a selection of barware and fine silver essentials. The online sale will showcase pieces designed and manufactured before, during and after this monumental time in American history.

Alan Bedwell, Founder & Owner of Foundwell, said: “America experienced a great surge of interest in novelty barware towards the end of Prohibition and the years following it. Innovation during this time flourished as designers began creating barware in whimsical shapes and styles, which doubled as decorative pieces that people would want to display in their home, rather than secret away in a cabinet. One hundred years later, this fascination and interest in novelty barware is experiencing a resurgence, with the current trend of the at-home bar – everyone wants to build their own home bar cart, curated with personal touches and unique tools and glasses.”

PROHIBITION IN THE UNITED STATES
The 18th Amendment to the Constitution of the United States, banned the sale, transportation and manufacturing of liquors beginning in 1920. Prohibition, however, proved difficult to enforce, and the United States entered a period notorious for bootlegging, speakeasies and other types of crime surrounding the production, smuggling, and distribution of liquor.

It was not until 1933 that the United States Congress adopted a new amendment – the 21st – to repeal the 18th, bringing an end to Prohibition. Still, the legacy of Prohibition remained and left a lasting impact on design, music, and consumption, which helped to create a romanticism that is revered to this day.

AUCTION HIGHLIGHTS
The sale features an original golf-themed silver-plated 1926 Cocktail Set, comprised of an extremely rare cocktail pitcher and six miniature matching golf bag themed cups (estimate $5,500/7,500). Considered one of the most important cocktail shakers to have ever been designed, the set was created by George Barry in 1925 and manufactured by the Derby Silver Company in 1926. Conceived of and manufactured during the height of Prohibition, the piece was perhaps intended to fool authorities by making it appear to be decorative or ornamental, rather than practical. A watershed moment for barware, this is often described by historians as the first figural cocktail shaker to have ever been made, igniting an interest in novelty barware that lives a century later.

Alan Bedwell commented: “The theme of golf is a natural fit for barware. As every golfer knows, after a perfectly good walk spoiled, there is always the 19th hole, and what better way to prepare the reward than with this original set.”

Another highlight of the sale is an impressive and rare Pair of Silver-Mounted Cut-Class Decanters by renowned English silversmiths Hukin & Heath (estimate $5/7,000). The two large decanters feature simplistic bodies with sterling silver mounts, complete with a lock and key and crowned by highly-cut faceted stoppers. Made during the 1920’s at a time when most affluent families employed staff in their homes, the locking decanters were a tasteful way to keep whatever prized spirit of choice they were filled with away from unwanted attention.

Alan Bedwell commented: ‘When I began buying and selling antiques, to have a single, let alone a pair of these, in your inventory meant you really had something quite special. They are the epitome of elegance and quality, and make for a focal point for any serious home bar.”

One of the most desirable and recognizable pieces of American barware history, the silver-plated Penguin-form Cocktail Shaker was made by renowned American jewelry and home good manufacturer Napier (estimate $1/1,500). Created circa 1936, shortly after the end of Prohibition and at the height of the Jazz Age, the iconic piece is one of three silver plated shakers designed by Emil Schuelke for Napier. With a removable head for filling and a pouring spout located in the mouth of the penguin, the decorative shaker is large enough to prepare a batch of drinks, making it the perfect piece for entertaining.

Alan Bedwell commented: “One of the most cherished cocktail shakers by collectors, the splendidly stylish piece is not only easy to use and clean, it is a fantastic decorative item on its own and who doesn’t love a penguin, after all!”