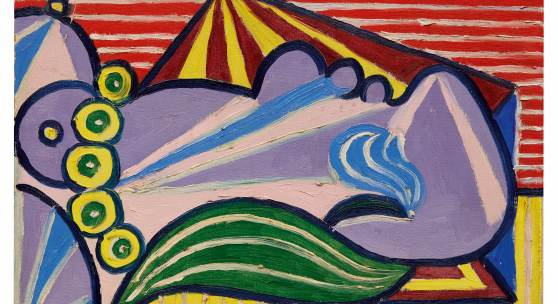 The Greatest Work by Wifredo Lam Ever to Appear at Auction:
Omi Obini from 1943
Estimate $8/12 Million
*Poised to Set a New Auction Record for the Artist *

NEW YORK, 17 June 2020 – Sotheby’s is pleased to unveil the full contents of the New York Impressionist & Modern Art Evening Sale, to be held live on 29 June. Our e-catalogue showcasing all of the works on offer is now live on sothebys.com, presenting enhanced visual storytelling through video, interactive media, a

Sotheby’s three New York evening sales on 29 June will be presided-over remotely by Chairman and auctioneer Oliver Barker from London, and will be live-streamed to the world. Bidders can take part live via Sotheby’s state-of-the-art proprietary bidding platform, or on the phone with Sotheby’s specialists on phone banks around the globe – in New York, Hong Kong and London. The auctioneer will see and accept bids via zero-latency video streams, broadcast to giant screens in an impressive ‘control center’ studio setup. All works on offer are now on view in an exhibition at Sotheby’s York Avenue galleries, which is open by appointment only.

IMPRESSIONIST & MODERN ART EVENING SALE HIGHLIGHTS
29 JUNE IN NEW YORK
Julian Dawes, Sotheby’s Head of the Impressionist & Modern Art Evening Sale in New York, commented: “We are excited to share the full highlights of our upcoming Impressionist & Modern Art Evening Sale, which is distinguished by one of the finest selections of international Surrealist and Modern art from Europe as well as Latin America ever to come to market at one time. Chief among these works is perhaps the finest painting by Wifredo Lam ever to come to market, on par with the artist’s masterpiece in the permanent collection of the Museum of Modern Art in New York, and the painting has the most ambitious estimate for the artist to date. We are also especially excited about Picasso’s defining Surrealist portrait of his mistress Marie-Thérèse, which comes to auction for the first time in seven decades. Both paintings are a sign that the market for Surrealist and Modern art continues to be strong season after season, and that fresh to market works of the highest quality will always command the attention of collectors.”

Leading the sale is Pablo Picasso’s Head of a Sleeping Woman (Tête de femme endormie), a stunningly vibrant and intimate portrait of Picasso’s mistress and muse, Marie-Thérèse Walter (estimate $9/12 million). Executed in July 1934, the painting is part of a series of works in which Picasso explored Marie-Thérèse sleeping in different poses, either fully recumbent or seated. The subject of sleep and its association with the unconscious was a recurring and dominant theme among Surrealists, and the way in which Marie-Thérèse appears to lose herself in oblivion as she sleeps makes it one of Picasso’s most fertile Surrealist images.

Picasso completed this canvas at the height of the Surrealist movement, when his palette was at its most vibrant and Freudian symbolism played a defining role in the imagery of the avant-garde. But Picasso’s composition in Head of a Sleeping Woman, with the deconstructed appearance of a striped tent and sand of the beach, is undeniably a work of the artist’s individualism, as it incorporates elements of his groundbreaking Cubist compositions of the 1910s. The breadth of imagery in the work makes it clear that Marie-Thérèse inspired Picasso’s creative genius more than any other model, and her very image conjured a creative synthesis of the most radical aspects of the artist’s production.

Head of a Sleeping Woman is appearing at auction this June for the first time since 1960, and has remained in the same collection for seven decades since it was acquired by Carmen and David Lloyd Kreeger in 1962. In recent years, Sotheby’s has established new benchmarks for Picasso’s portraits of Marie-Thérèse from the 1930s, including: £49.8 million in February 2018 in London for Femme au béret et à la robe quadrillée (Marie-Thérèse Walter); $36.9 million in May 2018 in New York for Le Repos; and £27.3 million in June 2018 in London for Buste de femme de profil (Femme écrivant).

THE GREATEST WORK BY WIFREDO LAM EVER TO APPEAR AT AUCTION