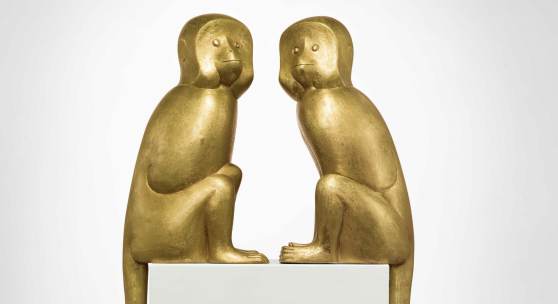 THE WORLD OF LES LALANNES
Featuring a Pair of Gilt Bronze Monkeys by François-Xavier Lalanne from the Collection of Ambassador and Mrs. Felix Rohatyn

ART DECO MASTERWORKS
From the Collection of New York Restaurateur Jean Denoyer, Including an Important “Fontane” Cabinet by Émile-Jacques Ruhlmann

NEW YORK, 24 July 2020 – Sotheby’s will present our summer sales of 20th and 21st Century Design in New York on 30 July. Comprising over 200 works, the two auctions showcase an extraordinary and diverse range of works by some of the industry's most iconic and highly-coveted designers.

All of the works on offer will be on view by appointment in Sotheby’s New York galleries beginning tomorrow, 25 July.

Our bi-annual offering of Important Design presents a curated survey of works from the last century, with important pieces spanning American and European prewar decorative arts to postwar and Contemporary design.

The sale closes with a section dedicated to Contemporary design, led by a pair of Unique “Extruded” High Console Tables by Marc Newson, which were commissioned directly from the artist by their present owner in 2010 and executed in white Carrara C marble (estimates $150/200,000 each).

A highlight from this section which particularly resonates with our present historical moment is Maurice-Claude Vidili’s Sphère d’Isolation (estimate $30/50,000). Designed circa 1971, this multi-functional work is equipped with all the necessities of a modern office, including seating space, lighting, storage and electric outlets. The sphere was designed as a quiet and comfortable room-within-a-room, allowing its user to find shelter in a peaceful and insulated environment. In addition to serving mainly as a private office space, the sphere was meant to embrace a variety of uses, including as a quiet zone on construction sites, an independent work room in a noisy open office, a private meeting space for sales pitches in crowded exhibition halls, and even as study in a small apartment.

Following the record-breaking auction of François-Xavier and Claude Lalanne’s personal collection at Sotheby’s Paris in October 2019, a remarkable group of works by the iconic duo distinguishes the present sale. The ensemble is led by François-Xavier’s Lalanne’s enchanting gilt bronze monkeys, Singe I and Singe II (estimates $400/600,000 each). Emerging from the collection of Ambassador and Mrs. Felix Rohatyn, these charismatic sculptures are exceptional additions to the artist’s rich bestiary. While Lalanne explored the present Singe series in a variety of different patina colorations, it is undeniably the “gold monkey” that is most revered and sought-after by collectors today. The Singe series signals a move from functionality to objet d’art and helped spur the revival of the motif towards the end of Lalanne’s decades-long career. Separate release available

Masterworks of animalier sculpture by François-Xavier are further distinguished by the offering of a single Grand Mouton de Peter – a spectacular and recent iteration of a career-defining leitmotif that can be traced back to the couple’s friendship with celebrated designer and architect, Peter Marino (estimate $400/600,000). In 2004, Marino encouraged Lalanne to execute a new series of original sheep inspired by the story of “Jason and the Golden Fleece” from Greek mythology. Conceived as a herd, each edition is comprised of three different forms: one ewe, one ram facing left, and one ram facing forward—the present model, which was executed in 2007. The Grands Moutons de Peter, or “Peter’s Grand Sheep”, are not only named after Marino, but also represent the artistic manifestation of an exchange of ideas and creativity that resulted in part from the many summers that the three friends spent together.

Additional highlights include: Capricorne II, a rare example that seldom appears at auction and one of only three versions known to have been produced during the artist’s career (estimate $300/500,000); a playful Petit Chien Prosaïque, also by François-Xavier, and Claude’s iconic Pomme Bouche round out the artists’ poetic yet humorous interpretations of the animal and natural worlds (estimate $30/50,000). Separate press release attached The sale series concludes with a spectacular auction dedicated to the highly-coveted work of American Designer Thomas Molesworth. Emerging from a private collection in Jackson, Wyoming, the sale offers 55 of Molesworth's rarest & most important forms, together capturing the superb craftsmanship and rustic-yet-refined charm of his iconic style, which has rendered his furniture timeless and versatile to a wide range of contexts.