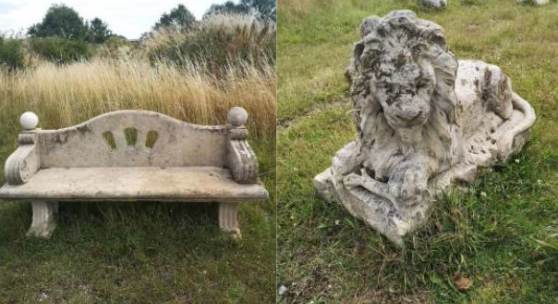 Summers Place Auctions are delighted to announce the sale of a unique collection of Garden Statuary. The collection comprises 70 lots and will be part of the Autumn auction on Tuesday, 29th September 2020.
The Perry Garden Collection was started in the 1920s when a Mr Perry opened a garage on the main Stroud road near the village of Dodington in the Cotswolds. He had the vision to create an extraordinary ‘go to’ destination at a time when the motorcar became popular and people started to go on days out. Mr Perry had the business sense to add a café to his garage and to offer more than just petrol and tea with cake - he created an environment with an incredible garden as the focal point.
It consisted of sunken gardens full of stunning statues, urns and benches, which over the years evolved into an important and unique collection. He acquired his treasures by travelling the Cotswolds and the West Country, attending various country house sales at a time when large country houses had become dormant and were being demolished following the Great War.
 
One of the first recorded sales that he must have attended was at the historic Owlpen Manor. This was originally a Tudor house, but in the late 19th Century it had a complete makeover in the then avant-garde Arts and Crafts style. This auction includes four stone benches, which he had purchased in the Owlpen Manor sale in 1924 conducted by the auction house Bruton Knowles, well known later as the alma mater of the renowned antiques expert Arthur Negus.
A near pair of Arts and Craft carved Cotswold stone seats, 176cm wide and 192cm wide, is estimated at £12,000-18,000 whilst a second pair of matching carved Cotswold stone corner seats, 136cm wide carry the same estimate.

Over the years Mr Perry continued to purchase garden statuary, with the final lot recorded being the extraordinary Cotswold stone lion gargoyle, which was bought from The Rocks, a massive country house near Corsham, and which was demolished in 1952. With a mouth drilled for water it is estimated to sell for £20,000-30,000.
From that period forward to the present day, the garage and café appears to have ceased trading. The gardens fell into disrepair and the whole site was fenced off with no access granted. Late last year, the present owners decided to clear the site and during the clearing, an Aladdin’s cave of stunning objects came to light.

Included are some important over life size terracotta figures on pedestals of the classical deities, Hebe, Diana and Flora by the celebrated Victorian maker, J.M. Blashfield. Unusually they are signed Blashfield by hand in the clay, suggesting that they were individual commissions. Together with a possibly unique dolphin fountain and surround also attributed to Blashfield, they carry estimates of £6000 upwards.
Various marble figures including one of Hebe circa 1830 after Canova is estimated at £20,000-30,000 - the original was created for Chatsworth, where it still stands today.
Additionally, there are various 18th and 19th century urns, eight finial urns from the driveway of The Rocks (estimate £8,000-12,000), mid-19th century marble campana urns, and a stunning pair of 18th century recumbent lions clutching the bones of their prey between their paws. Expected to fetch up to £50,000, this pair of rare Victorian carved Cotswold stone reclining lions are 80cm high by 100cm long.
As well as important sculptural lots, the collection is rich in more traditional but equally attractive pieces, with troughs, stone tables, finials and staddle stones galore with estimates ranging from £100 upwards.
Summers Place Auctions director, James Rylands comments: “It’s been many years since a privately formed collection like this has come to the market. All the pieces were acquired in what is generally accepted to be the Golden Era of collecting between the World Wars. When we held our first sale of garden sculpture 35 years ago, this material was readily
 
available, but now it’s a real treat to see such pieces and we are looking forward to finding new homes for the collection.”
The Perry Collection will be offered as part of the Summers Place autumn auction, which will include four cast iron pavilions from the world famous Camden Lock Market as well as a range of garden statuary and sculpture, natural history and quirky objects for the home and garden.