Sotheby’s and The Macallan Unveil The Red Collection 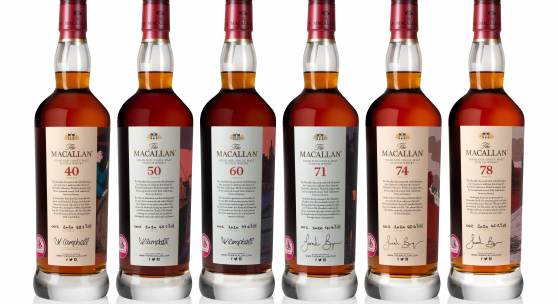 *Featuring The Macallan 78 Years Old,
The Oldest Aged Whisky Ever to be Sold at Auction*

*Proceeds to be Donated to Food Charity, City Harvest*

An extremely rare, complete set of The Red Collection is set to be auctioned by Sotheby’s in London on 31 October 2020, after being gifted by The Macallan to City Harvest to raise funds for the food charity which redistributes surplus from the food industry to vulnerable people across London. Estimated at £200,000-800,000, the unique lot will open Sotheby’s first annual sale of Spirits to fall on day that Halloween is celebrated around the world, The Ultimate Whisky Collection Part II + More.

This set differs from the standard release and can be identified by its exclusive labels, which are illustrated and signed by Spanish artist Javi Aznarez. Only two sets contain these labels: Set #1 will remain in The Macallan’s archives and Set #2 is being presented in the Sotheby’s auction – as such, it is the only complete set of its kind to be made available to collectors around the world. The Sotheby’s set also uniquely includes two exclusive display cases and two bespoke tables.

Jonny Fowle, Sotheby’s Spirits Specialist, said: “We are thrilled to partner with The Macallan to offer The Red Collection, alongside our second offering of The Ultimate Whisky Collection, as part of our inaugural Halloween Spirits sale. This is the only opportunity for whisky collectors to own a truly special Red Collection set with labels hand-signed by Javi Aznarez. This unique event also marks our third charity-related partnership with The Macallan in recent years, following record-breaking prices for The Macallan M Constantine and The Macallan in Lalique Legacy Collection in Hong Kong. We look forward to continuing this success with the sale of The Red Collection, the proceeds of which will benefit City Harvest London, which has enabled quality surplus food to be redistributed for free to those unable to access food during COVID, providing support for vulnerable people across the city.”

Inspired by the significance of the colour red throughout the history of the brand, The Red Collection captures The Macallan’s deep respect for tradition and craftsmanship. Distilled decades ago, in The Macallan’s signature copper stills, each expression in the collection has been matured in the distillery’s oak casks under the watchful eye of several generations of whisky makers. Over time, they developed into extraordinarily elegant aged whiskies.

The colour red has deep and long-standing significance for The Macallan, beginning with Alexander Reid, the farmer and teacher who founded The Macallan in 1824, whose surname means ‘the red one’ in Scots and was originally associated with red hair. In 1903, owner Roderick Kemp launched The Macallan Choice Old range, which was reportedly shipped in cases labelled with distinctive red print to distinguish it from The Macallan’s existing whiskies, which featured black labelling. Almost eight decades later, in 1980, red was to feature strongly in the release of The Macallan’s then oldest vintages, dated 1938, 1940 and 1950. Allan Shiach, chairman of The Macallan at that time, tied a red ribbon around the sought-after bottlings to denote their age and value.

These three characters are featured in an animated film created to introduce The Red Collection in collaboration with Javi Aznarez, acclaimed for his striking graphic art which has featured in several films, including director Wes Anderson’s forthcoming feature, The French Dispatch. The animation is set to music recorded by Scottish violinist Nicola Benedetti, one of the most sought-after classical musicians of her generation.

Each bottle in The Red Collection is encased in a hand-crafted oak presentation box created from the same sustainable European oak used to craft The Macallan’s oak casks. These boxes are beautifully upholstered with sustainably sourced soft red leather from Scottish supplier Bridge of Weir Leather, which creates upholstery for leading luxury car brands across the globe.