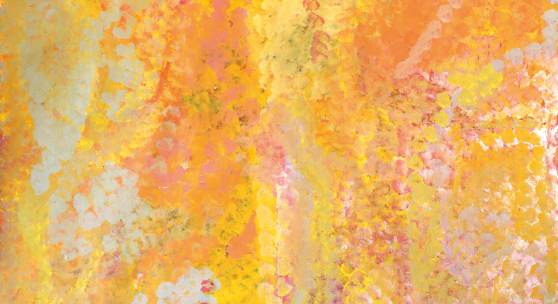 NEW YORK, 23 November 2020 – Sotheby’s is pleased to announce the second annual Aboriginal Art auction in New York, which will be presented as an online sale open for bidding from 25 November – 4 December. Comprising 52 lots, the sale features works created by artists from the world’s oldest continuous culture, including a selection of works from the collection of the late, pioneering Australian artist David Larwill, as well as masterworks from the most celebrated artists in the field such as Emily Kame Kngwarreye, Charlie Tarawa Tjungurrayi, John Mawurndjul, Charlie Numbulmoore, Mathaman Marika and more.

Timothy Klingender, Sotheby’s Senior Consultant Australian Art commented: “The success of last year’s inaugural auction in New York confirmed the appeal of Aboriginal art among a growing international audience so we are excited to once again offer a curated selection of outstanding paintings created by the field’s most renowned artists from 1960 to the present. We are also particularly honored to offer 16 paintings from the Estate of Australian artist David Larwill, collected over more than twenty years, reflecting both his deep respect and affinity for the Western Desert painters, and the artist's great 'eye'."

A dedicated exhibition for the sale will be on view by appointment only in Sotheby’s York Avenue galleries from 30 November – 3 December as well as available to the public online via our new immersive digital gallery experience.

A trailblazing Australian artist, David Larwill (1956 – 2011) was known not only for his distinctive style based on bold colors, stylized figures and simplified form, but also for his ability to segue comfortably between the European elements of Australia’s population and its traditional, indigenous peoples of remote Central and Northern Australia. During his lifetime he was a champion of the remarkable cultural output of Australia’s indigenous artists, which greatly influenced the art he created himself as well as the works he collected.

Larwill’s fascination with both outsider and indigenous art began well before his travels through remote Australia; as a student he was influenced by Jean Dubuffet and the expressionist outpourings of the CoBrA group – latching onto the raw, direct, figurative forms of expression that would remain at the core of his own work for the next 20 years – as well as with the tags and graffiti he found on the subways and in the streets of New York City, and in the work of Jean-Michel Basquiat – an artist who would have a profound and lasting influence on him. This predilection for the unconventional and rejection of the norm was reflected in his own artistic practice; disillusioned with art school, he was a founding member of ROAR Studios group in Melbourne, an anti-establishment collective devoted to expressionism during a period permeated with postmodernism and conceptualism. Despite, or perhaps because of, his anti-establishment stance, Larwill rapidly became one of the most renowned and successful Australian artists of his generation.

In the 1990s Larwill began his Aboriginal Art collection journey when he started routinely traveling to the arid desert lands of Central Australia and the semi-tropical zone known as the ‘Top End’. Finding a deep connection with the remote communities there and their core relation to the land, he established lasting relationships with the artists, enabling him to build a remarkable collection of Aboriginal Art. Featuring works by Yala Yala Gibbs, Ronnie Tjampitinpa, George Tjungurrayi, Warlimpirrnga Tjapaltjarri, Makinti Napanangka and Jackie Giles among others, the sale marks the first time his collection has ever been offered at auction.

A standout lot from the Larwill Collection is George Tjungurrayi’s Mamultjulkulunga (estimate $30/50,000), a classic example of his distinctive minimalist linear style and a feature in his first major solo exhibition at Gallery Garielle Pizzi in Melbourne in 1998 from which Larwill acquired the present work. The large canvas illustrates fields of narrow lines that ‘warp’ towards the opposite edges of the canvas, which relate to designs engraved on shields used in the Western Desert, as well as to a conceptualization of the physical appearance of the country around Lake Mackay with its parallel ridges of sand dunes.