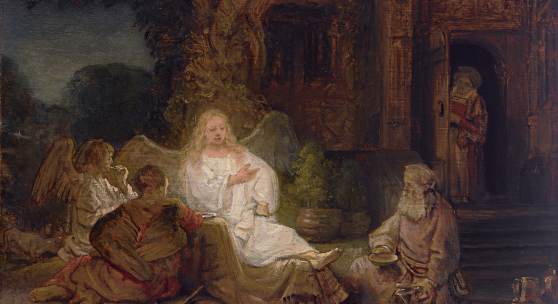 ONDON, 4 December 2020 – With Sotheby’s poised to re-open the doors once more onto its galleries in New Bond Street in London, this winter season’s series of Old Master and Treasures sales will showcase works by some of history’s most famous artists, including Albrecht Dürer and Rembrandt. From paintings to prints, to sculpture and drawings, these artworks will go on view alongside unique and extraordinary objects encapsulating the history of patronage and collecting over the centuries.

Alongside these 700 artworks spanning 800 years, two paintings from our sale of Old Masters in New York in late January 2021 will be unveiled in our London galleries as part of the pre-sale exhibition. Sandro Botticelli’s Young Man Holding a Roundel – the ultimate Renaissance portrait and a true beauty of the ages, and one of the greatest Renaissance paintings remaining in private hands – is estimated to sell in excess of $80 million.

It will be joined by Abraham and the Angels, a rare biblical scene by Rembrandt measuring just 6½ by 8⅜ inches (16 x 21cm) – a profoundly beautiful, gem-like painting on panel from 1646 that stands among the finest works by the artist ever to come to auction. The masterpiece was studied for months by the late British artist, Lucian Freud, a few years before his death, with the intention of making an etching inspired by the painting. Freud abandoned the print, remarking that he could not improve upon what Rembrandt had done. Last appearing at auction in London in 1848, when it sold for £64, this small-scale masterpiece is now returning to the block with an estimate of $20-30 million.

The Evening sale of Old Masters on 10 December offers a strong selection of 17th-century Dutch and Flemish paintings, including masterpieces by the titans of the Golden Age. David Teniers the Younger’s The Wine Harvest is one of the largest and finest works he ever painted and, from the collection of the Viscounts Gage, it comes to the market for the first time in well over 200 years (est. £3,000,000-5,000,000).

The sale features two early works by the great Jacob van Ruisdael, the most important and influential Dutch landscape painter of the 17th century, including his moving, early masterpiece Landscape with a cottage and stone bridge under a cloudy sky which last appeared in 1840 (est. £800,000-1,200,000). Offered alongside River landscape with farmhouses and a dovecote upon a high bank by pioneering naturalistic artist, Jan van Goyen, the works featured in the sale form an encyclopedic survey of 17th-century Dutch landscape painting and beautifully evoke the changing light and atmosphere of the Netherlands at different times of the day. The sale is further distinguished by Jan Steen’s wonderfully optimistic The Dancing Couple (est. £1,000,000-1,500,000).

Unusually, this season’s sale will also feature British portraits from each of the 16th to the 19th centuries by masters including Sir Thomas Lawrence (Portrait of Lieutenant-General Sir Herbert Taylor, est. £150,000-200,000), respected as the finest portrait painter of his day; Hans Eworth, whose portrait of Joan Thornbury (est. £400,000-600,000) includes a memento mori vanitas unusual of English art in this period; a magnificent portrait of the Earl of Chesterfield painted by Sir Peter Lely (est. £150,000-200,000) at the height of his career, and a painting of Thomas Orde in Rome on the Grand Tour by Pompeo Batoni (est. £300,000-400,000), which is considered among the finest of the artist’s portraits.

Treasures and Decorative Arts
Turning to our annual Treasures sale on 10 December, now in its eleventh edition, an exciting array of pieces includes a Regency bookcase from Devonshire House incorporating a concealed door through which George IV used to go through to visit his mistress Mrs. Fitzherbert in the next room, and a highly important and rare Fabergé varicolored gold-mounted nephrite desk set formerly in the collection of the King of Egypt.

Leading a group of historical Nelson related objects is a fine painted silk hatchment from the Vice Admiral Viscount’s state funeral carriage, which was made in 1805 and glimpsed by the public on 9 January the following year, when the coffin carrying the body of the nation’s hero made its way from Admiralty to St Paul’s Cathedral with an escort of 10,000 soldiers (est. £30,000-50,000).

A special single-owner sale, A Treasury of Vertu on 10 December offers 37 lots that together tell a veritable history of the gold box, and the limitless inventiveness of goldsmiths, lapidaries and enamellers. Hailing from an impressive private collection, these precious objects have in many cases only been known to academics through literature and illustrations in sale catalogues of the most prestigious historical auctions. The sale includes a menagerie of snuff boxes, from black Jasper boars and turtles to colourful carved hardstone beetles and ladybirds attacking an onyx fly.