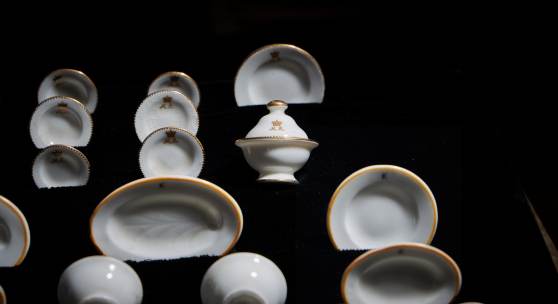 “The largest, most beautiful and most famous doll’s house in the world”

16 December 2020, London: This Winter, an extremely rare miniature dinner service commissioned in 1922, as a gift to HM Queen Mary for the world’s most famous doll’s house at Windsor Castle will star as a highlight of the Thomas Goode auction at Sotheby’s [34-35 New Bond Street, Mayfair, London, W1A, 2AA]. Open for bidding from 22 December through to 8 January 2021, with an estimate of £20,000-30,000.

Considered “the largest, most beautiful and most famous doll’s house in the world”, the five foot-tall house with working electricity, silver bath taps and flushing lavatories, was designed by Sir Edwin Lutyens in the early 1920s as a gift for HM Queen Mary, Queen Consort to HM King George V of the United Kingdom; the British Dominions and Emperor of India and grandparents of HM Queen Elizabeth II.

Over 1,500 artists, craftsmen and Royal Warrant holders were employed to create each element of the house in miniature – from real versions of 600 miniature books to 774 replica artworks, a wine cellar complete with real wine and spirits, a gramophone playing the National Anthem and a garage with a tiny Rolls-Royce.

Thomas Goode & Co, a British tableware emporium, who hold 2 Royal Warrants, were requested to create three miniature white porcelain dinner services for the doll’s house. Comprising 76 pieces in total, the sets were required for ‘use’ in the State Dining Room, The Nursery and The Kitchen. Each with gilded details and the Cypher “M.R.” (Mary Regina) under the insignia of a Crown. Each piece is individually stamped to the base with the Royal Doulton maker’s mark and set into a bespoke glazed presentation case. The individual pieces are one twelfth of their normal size and include serving dishes, tureens, bowls, dinner and side plates, and platters.

As with every commission, Thomas Goode kept one copy of each article supplied for their own archives, and now, Sotheby’s will offer the pairs to these three sets in this auction. The dinner service is accompanied by a facsimile of a letter from the Royal Household, and Queen Mary to thank Thomas Goode for their kindness: Her Majesty greatly admires the very careful and minute work which has been put into this charming little service, and I need not tell you how keenly The Queen appreciates your very kind thought, and all the trouble which has resulted in the production of this unique specimen service. Johnny Sandelson, Executive Chairman of Thomas Goode & Co said: “We were overwhelmed by the interest in these precious and rare miniature pieces, we’ve received interest from all around the world, funds raised will be re invested into our very precious archive.”