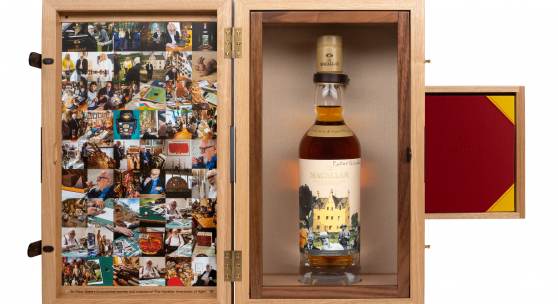 Sir Peter’s design for the A New Era of Advertising bottle (pictured above) celebrates the people in The Macallan’s history who were instrumental in broadening the distilleries reach beyond the local borders on Speyside onto a global stage. In the 1930s, a small stamp began appearing on letters sent by the distillery, bearing the slogan: “Whisky! Open a bottle of MACALLAN to-night”. Many years later, in 1978, the appointment of The Macallan’s first Marketing Director, Hugh Mitcalfe, ushered in a new era of advertising – one that would change the way The Macallan communicated with its consumers. Through a collection of memorable advertising campaigns, Mitcalfe and his team began building a brand with personality and purpose, generating much interest and excitement. The Macallan’s obsession with quality led to many creative partnerships. This included the introduction of bottle artwork, which featured art director David Holmes’ watercolor of Easter Elchies House – the spiritual home of the brand – and the surrounding countryside, also incorporated into the specially designed label.

Marking the third collaboration between Sir Peter Blake and the celebrated whisky brand, each of the 13 original Anecdotes of Ages bottles are hand-blown with an oak stopper, and feature a label signed by Sir Peter, accompanied by a leather-bound book showcasing all 13 label artworks and corresponding stories as well as a certificate of authenticity. For this collection, each bottle of whisky was carefully selected and the labels that Sir Peter created were designed to resonate with Macallan collectors and art enthusiasts alike.

In addition to the special bottle, the successful bidder will also experience a two-day one-night exclusive hosted experience at the Macallan Estate for two people and a 3D collage donated by Sir Peter Blake.

The Anecdotes of Ages Collection also marks the first collaboration between The Macallan and the Guggenheim Museum in New York, prompted by The Macallan’s wish to join forces with the museum as their charity partner. Opening on 17 February, The Macallan Anecdotes of Ages Virtual Art Exhibit will allow lovers of art and whisky from around the world to digitally explore the Anecdotes of Ages Collection. The exhibit consists of three galleries and provides a 360 virtual environment in which attendees will journey through Sir Peter Blake’s studio and learn about his pioneering, signature pop art and collage style. Visitors will also explore the Anecdotes of Ages gallery, showcasing the inspiration behind each of the artworks created by Sir Peter to tell the story of the 13 bottles, before the world reveal of the bottles with Sir Peter Blake’s handcrafted and original label artwork.

The appearance of the A New Era of Advertising bottle arrives on the heels of Sotheby’s Wine’s tremendous results for spirits in 2020. Spirits totaled $18 million last year, accounting for 20% of Sotheby’s wine and spirits annual auction sales, compared to less than 2% just five years prior. This marked increase in demand was underscored by two top prices in 2020: The Macallan Red Collection, which sold for $977,496 in October, and The Macallan in Lalique Six Pillars Collection which achieved $507,819 last March. In addition, Sotheby’s Wine set the world record for any wine or spirit sold at auction, as well as any private whisky collection, when The Macallan Fine & Rare 60 Year Old achieved $1.9 million during The Ultimate Whisky Collection sale in October 2019.

ADDITIONAL SALE HIGHLIGHTS
The March sale also features The Bo Johnston Collection, a vast ensemble of Single Malt Scotch Whisky accrued in the 1980s by the late South Carolina collector. Many of the US import bottles from Johnston’s collection have never before appeared at auction, presenting collectors with a special opportunity to acquire these seldom seen whiskies. Johnston’s voracious appetite for whisky led him to visit numerous distilleries in Scotland during the 1980s, and the wide range of bottles on offer encapsulates his breadth of knowledge of Scotch Whisky.

Featuring 550 bottles with a combined low estimate of $450,000, the collection is characterized by its extensive selection from Scotland’s most prolific independent bottlers, including 184 Cadenhead’s dumpy bottlings distilled in the 1950s and 1960s, and 197 Gordon & MacPhail bottles largely comprised of 1950s and 1960s vintages from their Connoisseur’s Choice range.

A bottle of The Macallan 50 Year Old Anniversary Malt 1928 rounds out the collection. Originally released at just £50 in 1983, it is one of only 500 bottles produced by the famed distillery.

There will be a window for online advance bidding ahead of the live auction on 13 March.