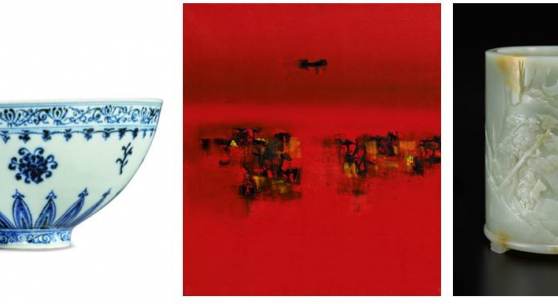 FEATURING: Recently Discovered at a Connecticut Yard Sale for $35, An Exceptional and Rare 15th Century Chinese Yongle Period Blue and White ‘Floral’ Bowl Heads to the Auction Block with a $300/500,000 Estimate

NEW YORK, 3 March 2021 – Sotheby’s is delighted to present highlights of its upcoming Asia Week sales in New York, featuring a diverse array of Asian art spanning 4,000 years of history. Among the highlights are an exceptional selection of Imperial jades and cloisonné enamels from the Brooklyn Museum, sold to support museum collections; Vasudeo S. Gaitonde’s Untitled – which will appear at auction for the first time this March after remaining in the collection of renowned American physicist, Robert Marshak and his wife Ruth for nearly sixty years, and more. All works on offer are open for viewing by appointment in Sotheby’s New York galleries beginning 11 March, with auctions taking place from 12 – 24 March.

Manjari Sihare-Sutin, Head of Sotheby’s Modern and Contemporary South Asian Sales in New York, said: “Following the success of our 25th anniversary sale in 2020, we are excited to return to Asia Week with an exceptional offering of works from the storied collections of Ruth and Robert Marshak and design impresario Patwant Singh, as well as masterpieces, such as Akbar Padamsee’s 1956 Landscape, which traveled for a representation at the La Biennale di Venezia, 1956, and a 1961 French landscape by Sayed Haider Raza. From works that have been publicly exhibited to true hidden gems that have rarely been seen in public, this year’s sale features works by more than 65 artists, with a conscious effort on our part towards expanding the discourse around the diverse corpus of South Asian Art created in the 20th century.”

On the heels of our record-breaking auctions in 2020, Sotheby's is pleased to present our annual New York March sale of Modern and Contemporary South Asian Art. Featuring a range of works carefully chosen from the diverse corpus of South Asian Art created in the twentieth century, the sale is led by two rare paintings on public view for the first time in decades, including Vasudeo S. Gaitonde’s Untitled, which will appear at auction for the very first time since it was acquired in the 1960s; and Jehangir Sabavala’s Lone Vigil from 1989, which entered a private international collection thirty-two years ago and has not been seen since. The sale features works from other significant private collections, including the Patwant Singh and Romen & Rasil Basu Family Collection, and works from the collection of renowned art critic George Butcher; a selection of sculptures led by an archetypal bronze masterpiece by Meera Mukherjee; as well as a diverse selection of works from the Bengal School of Art by many of the leading artists that defined this iconic genre including Gaganendranath Tagore, Benode Behari Mukherjee, Sunayani Devi and Sailoz Mookherjea.

Acquired directly from the artist in Bombay in the 1960s, Vasudeo S. Gaitonde’s incandescent red canvas Untitled, 1962 will appear at auction for the first time this March, after remaining in the collection of renowned American physicist, Robert Marshak and his wife Ruth for nearly sixty years (estimate $800,000/1,200,000). The early 1960s were a critical moment in both Gaitonde’s career and the development of Color Field painting. The present work represents the artist’s unique experimentation with color, surface, texture, proportion and suspension, a defiant and remarkable intent which became the hallmark of Gaitonde’s celebrated œuvre.

Leading Sotheby’s Asia Week sale series this March is a remarkable selection of Imperial jades and cloisonné enamels produced during the Ming and Qing dynasties from the Brooklyn Museum, sold to support museum collections. Two of the most significant gifts made to the Brooklyn Museum during the early years of the twentieth century are the cloisonné enamels collected by Samuel P. Avery, Jr. (1847- 1920), and jades and hardstones acquired by Colonel Robert B. Woodward (1840-1915). The 45 works on offer from the Brooklyn Museum represents the generosity of these two patrons, among others, who together were to shape the understanding of these two materials.