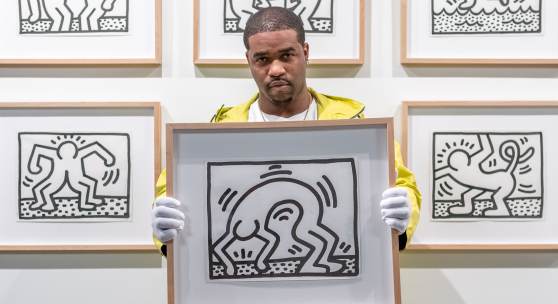 Watch The Rapper, Producer & Artist in Conversation with Sotheby’s Specialist Harrison Tenzer on Haring’s Work & Legacy And How They Influenced His Own Creative Practices in Music & Beyond

NEW YORK, 5 March 2021 – Sotheby’s is thrilled to present Keith Haring’s Greatest Hits: The Pop Shop Drawings, an online auction comprising a rare, unique group of 12 original drawings from 1985 by the artist known as the “Pop Shop Drawings”. The drawings feature some of the most iconic and well-known images from Haring’s oeuvre, including his radiant best buddies, barking dogs, acrobats, and break-dancers, which were the underlying inspiration for Haring’s Pop Shop, an innovative retail concept that transformed his practice into a beloved, global cultural phenomenon. With the goal of creating a platform that would make his art more accessible to a wider audience and seeking to bridge the gap between the worlds of fine art and commercial art, Haring established a storefront on Lafayette Street in Manhattan’s SoHo neighborhood in 1986 where he offered both his art and merchandise at accessible price points. The Pop Shop was highly successful, catapulting his personal artist brand to a global level and further solidifying him as a groundbreaking artist of his time and an artist whose legacy continues to grow and impact the world more than twenty years after his death.

A Keith Haring fan and visual artist himself, A$AP Ferg visited Sotheby’s to preview the auction and for a discussion about how the vibrant arts scene in New York has influenced his own artistic practices. Growing up in Harlem, he was surrounded by Haring’s art – from tags on the handball courts to his renowned Crack is Whack mural – and as a student of the High School of Art & Design, Ferg sought out the art scene in Soho where the Pop Shop was located and where he found a sense of community. Against the backdrop of Haring’s Pop Shop drawings, the two explore the intersection of music and art, what it means to be a multidimensional artist and the importance of community to art.

Discussing Haring's Pop Shop drawings and how Haring pioneered a democratic artistic practice that brought art to the masses, Ferg comments: "He was so multi-dimensional, and that's what I represent as well. He was able to monetize the brand and style across the globe. And what's the best way to do it? Put it on t-shirts, merchandise, clothes. He even painted Grace Jones to show that this is for everybody."

Haring's work was deeply influenced by music and the New York club scene, and commenting on how music and art influence each other, Ferg notes: "You can tell music inspired the drawings. It just signifies that he never forgot where he came from. Everything has a thread, and he made us understand his language. Music is sonically a vibe and these drawings are visually a vibe."

Presented publicly together for the first time since their creation in 1985, the Pop Shop drawings will be on view by appointment at Sotheby’s New York from 5 – 14 March with bidding for the auction open from 5 – 15 March.