Group of Works by the Scottish Colourists 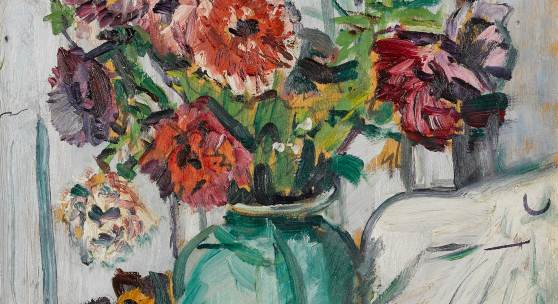 From the Collection of their Friend and Patron, Major Ion Harrison To be Offered by Sotheby’s this March

– Unseen at Auction, Having Remained in the Same Family Collection For Over 80 Years –

Bidding opens this Wednesday on a group of works by the Scottish Colourists acquired by Major Ion Harrison – an important patron and friend of the quartet of artists – between the 1920s and 1940s. This offering of 24 works from the Harrison Collection follows Sotheby’s sale in June 2018 of some 30 pictures from the collection, which sold for a combined total of £4.5 million and saw a new auction record achieved for Francis Campbell Boileau Cadell. Passed down through the family, the works remained together at Croft House, Major Harrison’s home where he openly welcomed the Colourists.

All four Colourists are represented, with a painting by Cadell, Carnations and Ranunculus (est. £250,000-350,000), leading this second tranche, alongside fourteen works in a variety of media by George Leslie Hunter. In addition, all 24 lots in the sale are making their first appearance at auction, having remained in the same family collection ever since they were acquired.

Of all the British artists of the early 20th century none embraced so totally the influence of French modernism than the Scottish Colourists. Their works dazzle with a vivacity and spontaneity not found elsewhere in British painting and it was their connections with France which engendered this thoroughly modern approach.

Cadell, Peploe and Fergusson all studied in the ateliers of Paris. They holidayed and painted on the beaches of Normandy, in the fishing towns of the Bay of Biscay and along the glamorous Côte d'Azur. Hunter discovered the South of France later in his career but the impact was absolute and marked a radical shift in his painting. For all of the Colourist artists the direct comparisons with their French counterparts is instantly apparent with the influence of Manet, Matisse and Cézanne particularly tangible. The sale features a selection of Colourist views of France painted in the artists’ own unique Post-Impressionist style.

Major Ion R. Harrison, a Glasgow ship owner, first encountered the work of the Colourist artists in 1921 when, encouraged by his friend Dr Thomas John Honeyman, later Director of Glasgow Art Gallery, he attended an exhibition at ‘Alex. Reid & Lefevre’ on West Street in Glasgow of paintings by Samuel John Peploe. It would be three more years before Harrison purchased his first work by Peploe, swiftly followed by a number of paintings by George Leslie Hunter. Not long after he purchased his first painting by Cadell.

‘I had never seen anything in art similar to these pictures…They really startled me for, to my eyes, they were so ‘ultra-modern’’. Ion Harrison recalling his introduction to Peploe’s work in 1921

The term ‘Scottish Colourists’ has now become inextricably associated with the work of Cadell, Fergusson, Peploe and Hunter, but the moniker was only coined in 1948 when three of the four were already dead. The pictures in the Harrison Collection represent such a broad range of styles, subjects and dates by all of the four Colourists that they present an opportunity to assess the differing influences and themes that link them together or contrast them.

In 1951, a total of one hundred and seventy nine works by the Colourists were shown when the Harrison collection was exhibited in its entirety at the McLellan Galleries in Glasgow. The exhibition stood as a testimony to Major Ion R. Harrison, a great collector, patron and perhaps most importantly friend to a unique group of artists who ushered in a new age of modernism in British art.