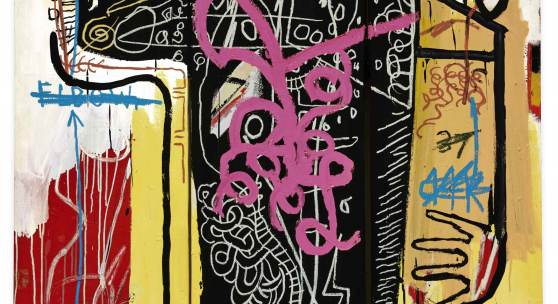 In Versus Medici, Basquiat takes command of the Western art narrative, and crowns himself, the son of immigrants from Haiti and Puerto Rico, as artistic royalty, taking on the old masters and positioning himself as the almighty successor to centuries of artistic genius. With great intensity and visual force, and acutely aware of the exclusion of artists based on race from institutional and critical consideration, Basquiat used his position at the periphery of the art establishment to forge a new and highly referential visual language. Having voraciously visited the Brooklyn Museum and the Metropolitan Museum of Art in New York, Basquiat recognized a glaring absence of Black representation within the art historical canon. In the present work, Basquiat positions himself as the heroic opponent to European history’s greatest dynasty of patronage and influence, confronting the canon they helped to shape by presenting his own potent masterwork. In its incendiary title, Versus Medici testifies to Basquiat’s ultimate aim of establishing a place for himself within the canon – and in doing so, he boldly declares his arrival as a brilliant, young artist into a new canon that would be forever transformed by his paintings.

Ever the iconographic alchemist, here Basquiat absorbs the legacy of Western art history and reshapes it to his own purposes. Through this painting, the Medici become a stand-in for the power systems of the art world at large, as figureheads within for a powerful system of art patronage that was echoed in the power structures of Basquiat’s own art world in 1980s New York. Recognizing that for centuries, every art historical movement was legitimized by systems of exclusion, Versus Medici presents a searing and heroic figure to oppose that narrative – while simultaneously aligning the young Basquiat as radical successor in the new pantheon of art history.

This powerful stance is eloquently captured in Basquiat’s use of the Greek term “Aopkehsks,” which could refer to the Hellenization of the Egyptian pharaoh Amenhotep, a prominent and idealized king, or to apotheosis, the elevation of the human to the realms of the divine. In either interpretation, Basquiat positions his ferocious figure as a vessel of divine will. Read alongside the symbol of the three-pointed crown – one of Basquiat’s defining and most recognizable motifs – there is little doubt the figure in the painting is depicted as an avenging hero of art history.