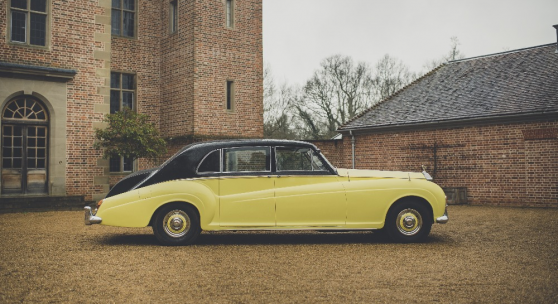 On 21st April 2021 Bellmans will offer one of the first B-series Phantoms produced. This luxurious model is believed to have represented Rolls-Royce in the 1963 Earl’s Court Motor Show and is expected to fetch £40,000-£60,000.

This Phantom V comes in a stylish black and yellow colour combination - totally on trend with yellow being one of the Pantone colours of 2021. It comes with all the luxuries of its time and is equipped with a refrigerated boot, a two way telephone, privacy screen and even has fitted decanters and glasses. Very rare for this time period is the fact that it already includes automatic headlight dipping.

The car is in good condition and has a 6.2 V8 twin carb engine with a 4 speed automatic gearbox. The Rolls-Royce comes with all the documentation you would expect and the bodywork is by renowned coach builders “James Young”. The car was also sold by the well-known London dealer Jack Barclay. The Phantom V has always attracted famous owners and among them was John Lennon who commissioned the exterior of his Rolls-Royce to be painted yellow with  

a Romany-inspired floral design by artist Steve Weaver. The psychedelic looking car was used by The Beatles on several occasions including when they went to Buckingham Palace. It is now on display at the Royal BC Museum in Victoria on Vancouver Island and currently valued at $7 million. Although this one didn't have a famous owner, it offers the opportunity to own the epitome of British Luxury at a fraction of the price.

www.bellmans.co.uk.
Bellmans next auctions are on 20th - 23rd April and 25th - 28th May. Please contact Bellmans, if you would like to consign any items for future auctions.