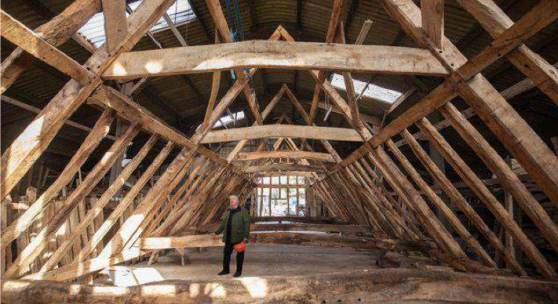 Summers Place Auctions' Spring Sale includes a magnificent barn, which was built within the original grounds of the Order of the Knights of St John Hospitallers in Suffolk where they first based themselves in 1154. The original part of the thatched roofed, wattle and daub clad oak framing of the building's core was constructed between 1760 and 1780, but some of the oak timbers indicate that they had been incorporated in an earlier building, which could well have been dating back to the time when the farm was owned by Sir Thomas Gresham.

It is about 51 feet long and 20 feet wide and will be approximately 26 feet tall once it has been rebuilt. In total the timbers weigh in the region of 20 tons. It comes with its own legend, which is crucial as no two timbers are the same. If a barn hasn't been taken down properly with every timber marked, it is virtually impossible to assemble it again. The vendor purchased the barn from the company he worked for in 2001 with a view to have this as a retirement project. The company, specialising in selling English barns all over the world, had bought it from the parents of the present owner of St John's Manor, Battisford in 1985, John and Pat Knock, who wrote a fascinating booklet on the history of the manor and its barn. This magnificent barn is expected to sell for a six figure sum and the buyer will need to take into account that the barn will need a suitable plot of land to be rebuilt.

Not only does this sale offer the rare chance to own an English barn, but one with a fascinating history and the current owner as well as the previous owners have spent years researching its history and that of the estate it came from. (stjohnsmanorbarn.com) Sir Thomas Gresham was instrumental in setting up the Royal Exchange under Queen Elizabeth I and the building also included an oak frame made of wood from his estate. The Royal Exchange celebrated its 450th anniversary in January to commemorate the Queen's visit to Gresham's huge Bourse, which she then proclaimed to be renamed 'The Royal Exchange'.

The Barn was built in the original grounds where a Preceptory was established in 1154 and by the mid 1300s the military arm of the Order had turned it into a substantial fortification known as a Commandery. In the 1530s, during the Reformation under Henry VIII, it was seized and confiscated. It was a common practise during the early English framing periods (15thC - 18thC) to incorporate timbers from earlier buildings and some of the timbers from this barn show carpenters' earlier workings and thus it is thought highly likely that at least a small percentage of those timbers date back to the Tudor period. From a 2013 Oxford Dendrochronology Laboratory report it could be deduced that the wall timbers were converted from trees which showed signs of intense management practise. This is consistent with evidence that Battisford and Ringshall in the 14th to 18th Centuries comprised vast oak woodlands which would have been actively managed. A 2015 Oxford University Radiocarbon analysis showed a 96% certainty that the building was reconstructed between 1760 and 1780.

Knights of St John and the 16th and last Commander at Battisford, prior to the Reformation was one William Tyrell. The interior of the barn can be seen to match the exterior of the barn in situ - the two windows and the grey door opening being visible in both the interior shot and the authenticated aerial photo of St John's Manor Barn taken by Skyviews on 16th May 1985 (By courtesy of Skyviews Aerial Archives, Leeds, LS15 4JJ).

Further information
The Greshams:
Following the seizure of the Battisford Commandery by Henry VIII during the Reformation, not much is known about what happened for the next few years. However records show that in 1544 the estate was sold to Richard Gresham (1485- 1549), an important noble at the Court of King Henry VIII. Richard's son Thomas, inherited the estate in 1549 and lived through the years of the death of Henry VIII, the brief years of reign of Edward VI and Queen Mary I, before becoming courtier to Elizabeth I who was crowned in 1558. After re-introducing his family name at Royal Court, Thomas was shortly thereafter appointed Royal Agent at Antwerp, Belgium, at a time when it was necessary for the English Crown to raise money abroad. Seeing the vast wealth of both Venice and Antwerp originating from the financial wizardry of those cities' merchants, Thomas then put into practice an idea his father had had, namely that London should have its own Bourse. He acquired land along Lombard Street and at Cornhill, where he built London's new Bourse. Thomas was given a knighthood for his efforts, and like his father also became Lord Mayor of London. At his death not many years later, he was said to have been the wealthiest noble in England. Sadly his amazing building was destroyed in the Great Fire of London (1666).