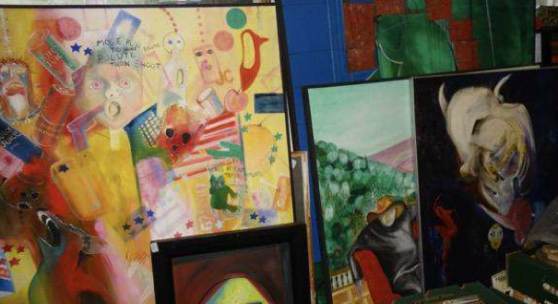 Dr Gerald Moore was a polymath, who ran a medical empire, a Safari Park and Motor Museum, while also painting, sculpting and writing novels, children's books and poetry. Born in 1926, he spent his life in London, Kent, Sussex and retired to Devon where he died in 2018 at the age of 91. His collection of his own art and sculptures will now be sold at Summers Place Auctions on 18th May 2021 and the remainder of his art collection will have its own timed auction at Bellmans, starting in early May until the 23rd May, with furniture from his estate included in Bellmans' regular furniture auction on 26th May 2021. The sales include over 180 works by Gerry Moore and approximately 80 further lots.

Gerry moved to Devon and upon the death of his first wife Irene sold the contents of Heathfield Park and its Motor Museum at Sotheby's in 1993 with the BBC filming a documentary of the sale. Summers Place Auctions' director James Rylands and Dendy Easton, former director of Sotheby's Sussex and Antiques Roadshow expert, were both involved in the last sale and remember Gerry well. James said: "Despite his diminutive physical stature he more than compensated with his larger than life personality and passion for art. We are naturally delighted to be involved in organising an auction on behalf of his family nearly 30 years after the original Sotheby's sale."

He was born to a dentist and pianist in 1926, but his father lost everything in the crash in 1929 and they had to move to the slums of Bermondsey for a couple of years before moving  

 to the suburbs where he started school at Eltham College. He was brought up in a rigorously intellectual environment and his early education was certainly eclectic. He discovered painting early on and had immediate success with a Crucifixion painting appearing on the front cover of his junior school magazine at the age of eight. He credited his art master for opening his eyes to modern art and it is no surprise that some of the proceeds of the Sotheby's sale went to open a gallery at Eltham College where his work was displayed next to those by students and emerging talents.

During the war, the family house was bombed out and he enrolled at the Italia Conti Academy of Theatre Arts in 1940, where he got the chance to play several roles in wartime films, including with such stars as Thora Hird and Petula Clark. He never looked at acting as a career though and started medical school at Guy's Hospital at the age of 18. He graduated from there in dentistry in 1949 and later in medicine in Dublin in 1954.

Married life started in Kent, where Irene, a model, and he were one of the first to convert a barn into a house and where he also built his first studio. In 1963 they bought Heathfield Park in Sussex and brought up their three young sons in a 17th century mansion surrounded by hundreds of acres. They soon opened the garden to the public, and set up a riding school, which was frequented by the Saudi Royal family, who spent summers as guests in the house. In the early 1970s they restored the Gibraltar Tower and set up a wildlife park with exotic animals and birds, soon followed by a car museum, which included Rudyard Kipling's and Lady Penelope's Rolls Royces and the original Chitty Chitty Bang Bang from the famous film. They ran these visitor attractions for over 20 years (at one point attracting over 100,000 visitors a year), while he continued his successful career as an oral surgeon in Harley Street where he looked after celebrities and politicians on a regular basis. He also co-founded Cavendish Biomedical Care and his autobiography appeared in 1982. In Devon he moved into the house that used to belong to the Rev. John 'Jack' Russell, who became famous for breeding terriers, and Gerry continued to paint, sculpt, write and as an avid collector added to his collection.

Gerry Moore, the artist, really started when he found some oil paint at home in 1946 and his first attempt was highly praised and encouraged him to continue. He saw it as a way to reflect on ideas and his work made him see the need to find a way to tap into his deep obsession with the tragic conditions of life. He remembered his first postmortem when he was overcome by pessimism, an ambience of sentiment and outlook that would dominate his creative life. Trips to Paris in 1946 and Italy in 1950 opened his eyes to various art forms and in the same year he started a part-time course at the Bromley College of Art and also exhibited, and sold, his first painting at the Whitechapel Gallery. Exhibitions around the UK followed and highlights include his exhibition at the Scottish National Gallery in 1959 and an exhibition with Hockney at the Heal's Gallery in 1961, and several exhibitions in German galleries in the 1990s.  

Gerry described his style as expressive experimentalism, he decided early on that he wanted to stay figurative and he deconstructed images in his own fashion. Early life circumstances were depressing, but they strengthened him and he was striving to achieve and with it came a lifelong compulsion to paint. His works can be deeply disturbing or poignantly reflective and melancholic as well as projecting humour both absurd and touchingly. He took inspiration from daily life and one of his first themes was the Teddy-boy cult in the late 1950s. He was inspired by many British artists, in particular Francis Bacon, Ruskin Spear and Jacob Epstein, but it was in the late 1950s that a meeting with the 'Australians', among them Arthur Boyd, took him where he wanted to be. Their art was believably figurative but like nothing he'd previously seen - dynamic, powerful and disturbing.