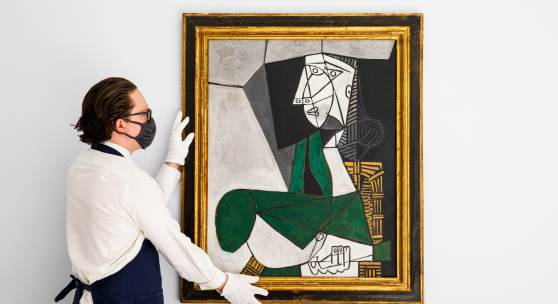 An Exceptionally Rare Portrait Of Pablo Picasso’s Partner and Muse, Françoise Gilot To Join Sotheby’s Evening Sale of Impressionist & Modern Art This May in New York

Held in a Private Collection for Nearly 35 Years, The Work is Estimated to Achieve $14/18 Million

AUCTION 12 MAY IN NEW YORK

Public Exhibition Open by Appointment Beginning 1 May On York Avenue

NEW YORK, 28 April 2021 – Appearing at auction for the first time in nearly 35 years, Pablo Picasso’s riveting 1953 portrait of his partner and muse, Françoise Gilot, will join Sotheby’s Evening Sale of Impressionist & Modern Art on 12 May in New York.

Remarkably rare within the artist’s exhaustive and prolific oeuvre, Femme assise en costume vert belongs to a group of portraits Picasso created in the late winter of 1952 and the early spring of 1953 that depict Gilot during the couple’s time living with their two children, Claude and Paloma, at the villa La Galloise in Vallauris, France. While Picasso produced an impressive body of work testifying to the joy he experienced with Gilot and their children, this mesmerizing painting reflects the tensions between the two artists in this late stage of their relationship, as well as Picasso’s continued stylistic versatility. Prefiguring his bold planar sheet metal sculpture from the 1950s and 1960s, Femme assise en costume vert recalls Picasso’s pioneering Cubist compositions in its angular and delineated form, as well as his tortured portraits of Dora Maar from the late 1930s and early 1940s. In its striking evocation of form and elegantly restrained palette, Femme assise en costume vert is a profound and highly technical painting marking the culmination of Picasso and Gilot’s personal and artistic collaboration.

Picasso’s portraits of Françoise Gilot – an artist in her own right, who will celebrate her 100th birthday this November – are seldom seen at auction, underscoring the importance of Femme assise en costume vert’s appearance in the May Evening Sale. Estimated to achieve $14/18 million, the work was last sold in December 1986 at Sotheby’s London when it brought $567,986. Femme assise en costume vert is now on view until 30 April in our New Bond Street galleries in London, before joining our marquee exhibitions of Contemporary and Impressionist & Modern Art beginning 1 May in New York.

Helena Newman, Worldwide Head of Sotheby’s Impressionist & Modern Art Department, said: “Picasso’s female portraits are like a diary of his life and love, and it is so exciting to be able to turn to Françoise Gilot’s chapter – one that lasted a decade and resulted in two children, Claude and Paloma. This 1953 work is a magnificent culmination of their relationship and its impact on Picasso’s art – bringing together Cubist, sculptural and graphic elements with a painterly motif and the green palette that the artist associated with Françoise. Having been acquired by the present owner at Sotheby’s in 1986, it will now return to our auction room – continuing a strong start to the year for the artist, demand for whose works is proving to be as insatiable and as global as ever.”

Julian Dawes, Co-Head of Sotheby’s Impressionist & Modern Art Department in New York, added: “As one of the principal muses that inspired Picasso’s work, Françoise Gilot holds a critically important role in the story of the artist’s life. But Picasso’s portraits of Gilot are much rarer to market when compared to portraits of Marie-Thérèse Walter or Dora Maar, for instance, making Femme assise en costume vert such a unique and extraordinary work. While few comparable portraits of Gilot of this quality and scale have appeared at auction over the past decade, each has performed exceptionally well, far surpassing estimates, evidence that the market always responds enthusiastically to Picasso’s portraits of this crucial period in his body of work.”

Picasso first met Gilot in May 1943, when the artist was still entangled in a turbulent relationship with the Surrealist artist Dora Maar. Gilot quickly became Picasso’s muse and, eventually, his partner, as her youthful vigor inspired a new direction in his portraiture. Over the following decade, the artist produced an impressive body of work reflecting the joy he experienced with Gilot and with the two children that they had together.

During the time in which Femme assise en costume vert was executed, Picasso and Gilot’s relationship was deteriorating. Gilot was aware of Picasso’s infidelity and whilst he attempted to persuade her to stay, she was determined to leave and pursue her career as an artist. In response to this, Picasso painted numerous portraits of his partner, many of which, like the work to be offered in May, show Gilot either seated in an armchair or involved in domestic activity; it is as though Picasso felt in painting her that he could keep her as a presence in his life. Only a few months after Femme assise en costume vert was painted, Gilot would leave Picasso to begin a life of her own in Paris with their two children.