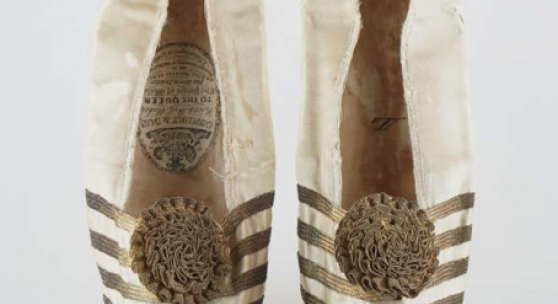 Bellmans' auction on Wednesday, 26th May, includes a beautiful pair of ballet-style slippers which once belonged to Queen Victoria. The cream satin shoes with gold thread bands and raised rosettes were made in the 1840s/1850s by the boot and shoe makers to the Royal Family, Gundry & Sons (one shoe includes the original label). It is fitting that it will be sold almost exactly 202 years after her birth on 24th May 1819 and the slippers are expected to sell for £2,000 - £3,000 (plus buyer's premium). The shoes had been gifted by Queen Victoria to her Mistress of the Robes, Harriet Sutherland-Leveson-Gower, Duchess of Sutherland. Her granddaughter Lady Florence married Henry Chaplin, 1st Viscount Chaplin and the slippers stayed in the Chaplin family until they were sold at Burwell Auctions in their Victoriana Sale on the 13th May 2000, where the present owner acquired them.

A similar pair of Queen Victoria's slippers can be found in the collection of the Science Museum. The almost identical slippers also carry a label for Gundry & Sons, Boot & Shoe Makers to The Queen, The Prince of Wales, The Royal Family, H.R.H. The Duchess of Kent, and the Princess Charlotte of the Belgians, 1 Soho Square, London. The company also famously created the footwear for Queen Victoria's wedding to Prince Albert in 1840. The ballet-style slippers with golden stripes are a typical design of the era and the small leather soles do not have heels. Shoes like these were used for dancing and indoor wear and were often a few sizes too small to make the women's feet look more delicate. These shoes are 23.5 cm long, which is about a size 3-3.5 today.

A terracotta plaque commemorating Queen Victoria's silver jubilee is also included in the auction, estimated at £300 - £400. Julian Dineen, specialist in charge of the auction, explains: "There is definitely a taste for memorabilia related to important historical figures at the moment. The recent sale of Churchill's slippers indicated that and although we don't expect Queen Victoria's slippers to necessarily reach five figures as they are less rare. We suspect that Queen Victoria's household would have ordered more than one pair of a particular style and due to their delicate nature they probably wouldn't have been worn too many times."

In Bellmans' March auction a brandy balloon from circa 1960, which used to belong to Sir Winston Churchill and was a set of six, sold at the same time as his velvet slippers. Three further glasses can now be included in this auction. Like the previous balloon, these have a large tulip-shaped bowl decorated in white enamel with the monogram WSC. Unlike the glass sold in March, all three of these are offered for the first time to a new audience and come directly from a branch of the Churchill family.

The whereabouts of the final two glasses are currently unknown and these are expected to fetch £7,000 - £10,000 each. A more unusual lot is a cigar butt that belonged to Sir Winston. The current owner's grandfather, Arthur Church, served as a policeman at Scotland Yard in the 1940s and while he was on police duty escorting Churchill, the Prime Minister smoked a cigar and Mr Church picked up the discarded butt. The 7 cm long butt is sold with a piece of paper in three parts inscribed 'THROWN AWAY TUESDAY SEPT *** 194* BY RT HON WINSTON CHURCHILL' - it is estimated to sell for £800 - £1,200.

A further lot is an autograph of Sir Winston Churchill - inscribed 'With all good wishes from Winston S. Churchill 1948' which is being sold together with Sir Desmond Morton's autograph, on a separate sheet. Sir Desmond was a senior civil servant and Sir Winston's former private secretary. The current owner's grandfather acquired it from an acquaintance of Sir Desmond and the lot is sold with a handwritten letter regarding the acquiring of the signature; as well as a typed sheet of Sir Winston's achievements with a photograph to the reverse. It is expected to fetch £400 - £600. Another lot with a Churchill connection is a painted, wooden model boat 'Namouna' which is 69cm long, and was sold at auction when The Hotel de Paris in Monte Carlo underwent refurbishment in 2015 and a large part of the contents was auctioned off. Sir Winston had been a frequent guest at the Hotel de Paris from 1945 onwards, spending his winters in Monte Carlo.

Initially he occupied an apartment on the 4th floor of the Rotunda, but in the early 1960s, invited by Aristotle Onassis, he stayed in a luxury apartment on the 8th and the most recently completed floor, next to the restaurant 'Le Grill'. From that time on the apartment was known as the Churchill Suite. This model boat formed part of the furnishings of that suite and the present owner's husband was the successful bidder during the auction in January 2015 and it now carries an estimate of £300 - £500.